The second instalment in the Puppet Master franchise is easily on a par with the first film. What it lacks in gore and thrills, it more than makes up for with a fun streak of dark humour.  What can I say? I am an easy mark for this kind of thing.

Leading on, more or less, from the events of the first film, the plot this time involves a group of people who head to the home of Andrés Toulon to find out just what happened to the last group. It's mentioned that Alex, the character played by Paul Le Mat in the first movie, has been kept safe and secure in a facility designed to help his mental healthy recovery, and it's clear that nobody is in a rush to believe a tale of lively corpses and murderous puppets. That is, of course, until they start realising that they are in danger from a lively corpse and some murderous puppets.

David Allen is the director this time around, working from the script by David Pabian. He worked on a number of instalments in the series, creating some of the puppet effects, but this would be his only directorial work. Despite his lack of experience in this main role, Puppet Master II doesn't ever feel as if it is in the hands of anyone less experienced than other Full Moon Features names. Granted, this is perhaps due to the film sharing a lot of team members with the original, and Band helping to oversee everything, but it's still a damn fine effort from Allen.

Although it feels quite cheesy at times (especially during the moments that force a romance between the characters played by Elizabeth Maclellan and Collin Bernsen), and although there is a twist that is about as surprising as the moment that the masked criminal is revealed to be Old Man *insert name here* in any Scooby-Doo adventure, this remains surprisingly committed to putting together a proper sequel, as opposed to another feature mixing in as much old footage as possible (which is often the main M.O. of Full Moon Features). You get to learn a bit more about the history of Toulon, although I am willing to accept that the continuity will become more and more . . . flexible with every subsequent instalment, and there's a new main addition to the roster of killer puppets in the shape of Torch.

Maclellan and Bernsen are okay in their roles, I suppose, and Steve Welles has some fun as a mysterious, bandaged, figure who appears and acts suspicious from his very first moments onscreen. Nita Talbot may not stick around for too long, but she gets some of the best scenes, and there are a few precious moments of wonderful interplay between Sage Allen and the legend that is George 'Buck" Flower.

The pacing isn't quite as good in the first half as it could be, but it's good enough to keep things ticking over while pieces are moved into place for a very enjoyable third act, and a genuinely amusing little coda. Will things drop off sharply with the third movie? I'm about to find out. 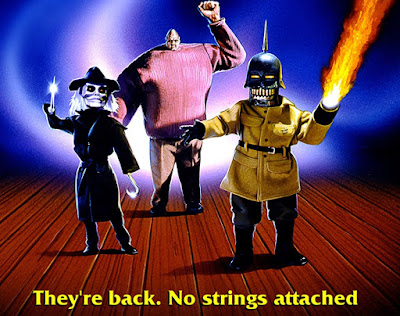