It seems a bit unfair to review Puppet Master: The Legacy when I have reviewed all of the other movies that came before it. Because this is one of those specials that we've come to expect from Full Moon Features, a film that has about ten minutes of new material in there, if that, with the rest made up of edited sections from other movies. Charles Band, credited as director here (under the name Robert Talbot), never met one movie that he wouldn't try to stretch into three more movies.

The very slim plot sees a woman (Maclain, played by Kate Orsini) trying to track down the secret of Toulon. She eventually tracks down Eric Weiss (Jacob Witkin), who is actually the older incarnation of the boy named Peter Hertz, a child saved by Toulon in the third movie. As Maclain demands answers from him, Eric plays her a number of tapes and tells her a number of stories about the life of Toulon. It's all stuff that viewers will be familiar with, but what is more annoying is that it's also all supposed to be stuff that Maclain also already knows.

I would be kind to this movie and say that it was best viewed as a "greatest hits" swansong for the series, but neither of those things are true. Perhaps it was all meant to end here, although I am glad that it didn't (unless the next instalments can somehow get any worse, which I seriously doubt), but there were so many more good clips that could have been served up to entertain viewers, and remind them of what they loved best about the series. What you get, instead, is just a potted version of every other film (although I don't remember too many scenes from part 5 . . . but it's in there) without a decent enough framing device to make it feel like anything other than the lazy cash grab it so obviously is.

Orsini is quite bad in her role, but she's not given much help from the dialogue she's made to spout (by C. Courtney Joyner). Witkin is slightly better. And then you have to endure more moments you've already endured, as the flashbacks really take over with Greg Sestero talking in his horrible French accent. At least that allows you to know the structure, and to know that once that portion of the story is out of the way it is a Sestero-free zone for the rest of the movie. Thank goodness for small mercies. There are incidental pleasures from seeing the clips that feature action from the second and third movies, but you could always just . . . rewatch the second and third movies, which would save you having to be reminded of the weaker elements of some of the other instalments.

No wonder Band credited himself under a different name here. Taking any directorial credit is a bit of a cheek, considering how much of it is simply placing the work of others in some kind of series overview film collage. Easily avoidable if you've watched the series in order. 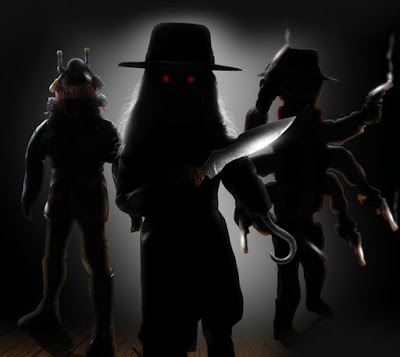