Taking place mainly in 1988, 1997, 2006, and 2015, In The Shadow Of The Moon is a sci-fi thriller that will hold no surprises to anyone who can pick up on the obvious seeded clues. It will also hold no surprises to anyone who has seen the trailer. Or, because I am going to go into some more detail, anyone who reads this review. So, if you haven't seen it, proceed with caution. The film is not good, but you're more than welcome to watch it before reading the rest of this review.

Boyd Holbrook is a cop named Locke, working with his partner, Maddox (Bokeem Woodbine), when they end up investigating a number of mysterious deaths. The person responsible, Rya (Cleopatra Coleman), is chased down and ends up losing an argument with a speeding subway train. Meanwhile, Locke's wife is giving birth to their first child, but that isn't going to end too well either. Nine years pass, the killer reappears, and Locke starts to become obsessed with figuring out just what the hell is going on.

Directed by the usually-dependable Jim Mickle, In The Shadow Of The Moon proves that he shouldn't spend too much time away from his old co-creator, Nick Damici. Because the more I think about it, the more I am convinced that this is a terrible film, easily the worst thing that Mickle has done so far. It's not necessarily the direction that is the biggest problem, but the fact that he couldn't get better performances from his cast, or figure out small ways to improve the script, undermine his ability to help something with a concept that requires a bit more attention to detail.

Gregory Weidman and Geoffrey Tock are the men responsible for the script. Their background seems to be in TV, and it looks as if this is their first feature, which explains a number of the failings. The characters are a bunch of tropes mashed together (seriously, they just have Wookbine saying "shhheeeeeit" more than the jokingly stereotypical black character in Not Another Teen Movie), they don't feel connected to any wider world out there, and the main premise has at least one plot hole you could drive a huge truck through. Time travel is always perilous territory, which means people usually have to decide whether to approach it seriously or just hope viewers go along with everything as they deliver fun. Weidman and Tock choose a worse path, trying to be serious while hoping that nobody notices the massive error in their plotting that undoes the entire film before your eyes while you should be enjoying the final scenes.

The extra disappointment of Woodbine's character being so poorly written is that he still gives the best performance out of the lead roles. It's hard to tell, beneath the weight of the weak script, but he does. Holbrook just isn't strong enough to carry the film, so it's hard to care about how things turn out as the movie begins to focus more and more on his character, Coleman is used best when just fleeing from cops, as opposed to the moments in which she has to explain things that don't make sense, Michael C. Hall is solid, but sadly underused, and Rudi Dharmalingam is hampered by playing a character who is shoehorned in because . . . nope, I've got nothing. I know what he ends up contributing to the plot, I just have no idea why they decided to plan it that way.

The first half is a decent little genre film, and it's a great shame that there wasn't a way to somehow keep all of the action based in 1988 while the leads figured things out (btw I am SURE that could have been done, but that's why I just maintain this blog while others write the movie scripts), but it's sad and frustrating to watch everything unravel in the second half, leading to a manipulative finale that is unearned, and ultimately dishonest (no matter what the sleight of hand tries to make you think). 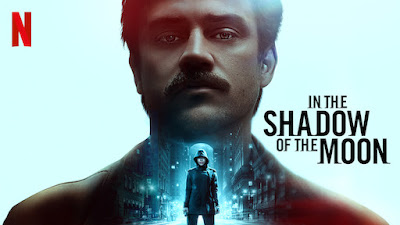