It Came From Beneath The Sea is one of many creature features from the 1950s that takes a cue from the threat of nuclear power. It features some great, as usual, special effects from Ray Harryhausen, but I rate it below the more enjoyable movies that he would help create in glorious technicolour.

When a submarine gets itself into a bit of trouble underwater, curiosity is aroused once it is eventually freed and some animal tissue is found attached to it. The animal tissue is from something big, very big. Two marine biologists (Lesley Joyce, played by Faith Domergue, and John Carter, played by Donald Curtis) are called in to investigate further. It's not long until they come to the conclusion that they're dealing with a giant octopus, one that has been made bigger and also starved of its usual food supply by some hydrogen bomb testing. As they race to find a way to deal with the creature, helped by Commander Pete Mathews (Kenneth Tobey), they attempt to resolve the whole situation without panicking the general public. The octopus, however, has other ideas. Especially when it gets close enough to the Golden Gate Bridge.

Director Robert Gordon doesn't do too bad a job here, but he's hampered by a stilted script written by George Worthing Yates and Harold Jacob Smith. The actors are also affected by the poor dialogue that they have to deliver. The flirting between Professor Joyce and Commander Mathews is clumsy and hard to believe, while poor Dr. Carter doesn't get to do all that much until the big finale. Oh, he's present in a lot of scenes, but he may as well not be. As for the rest of the cast - such as Ian Keith, Dean Maddox Jr and Chuck Griffiths - they all blend into the background. They play their part in the grand scheme, and deliver the lines that they get to deliver, but there's nobody who stands out. That leaves viewers with three lead characters to root for, two of them stuck with badly written moments of flirtation and one just far too bland to bother about.

The film is lifted by the work of Harryhausen, as most of the films to have his name attached were, and when the giant octopus is onscreen, or partially onscreen, it's an impressive beastie indeed. So impressive that it lifts the entire movie from just below average to just above average.

I don't dislike this movie, but it's one that I won't really revisit while I have other Harryhausen films to choose from. Fans of '50s sci-fi movies will find enough to enjoy here and those making their way through the filmography of Mr. Harryhausen may end up liking it a bit more than I do. 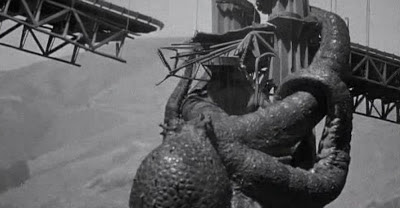