From the wonderful opening strains of the bombastic score (by Bernard Herrmann) to the immediate entry into strange adventure to the colour and vibrancy of the whole thing, The 7th Voyage Of Sinbad is a real treat for fans of fantasy films.

It tells the story, of course, of Sinbad (played here by Kerwin Mathews) at a time when he rescues a powerful magician (Torin Thatcher) from a dangerous cyclops. Unfortunately, while being rescued the magician also ends up losing his magic lamp with a genie (Richard Eyer) inside it and so is determined to return to thedangerous island. Sinbad refuses. He is too busy making preparations to marry the beautiful Princess Parisa (Kathryn Grant) to embark on such adventures. The magician then secretly casts a spell that turns the princess into a teeny tiny humanoid, thus making him the one person that Sinbad asks for help. There is a cure, but the ingredients won't be easy to get hold of. Can you guess where they have to go?

Directed by Nathan Juran, from a script by Ken Kolb, this is simply great fun from start to finish. My only complaint is that a couple of the creations (mainly the cyclops and the roc) aren't up there with the best that Ray Harryhausen could do. They are decent enough, however, and also joined by a dancing snake woman, a dragon and even another fighting skeleton (a precursor to the bony army that would prove so memorable in Jason & The Argonauts).

The acting is all fine. Mathews is decent, if rather uncharismatic, in the role of Sinbad, Thatcher is wide-eyed and entertaining enough as Sokurah the magician and Grant is lovely as the diminutive princess. Eyer isn't the most grandiose or impressive genie, being just a kid in a shiny turban, but he's not onscreen all that often and doesn't do enough to spoil the whole film, despite trying hard at the very end.

The Sinbad films are great pieces of escapist entertainment, as are most Harryhausen movies, and I recommend both this movie to people and also the boxset linked below as a bargain way to pick up three fun adventures. 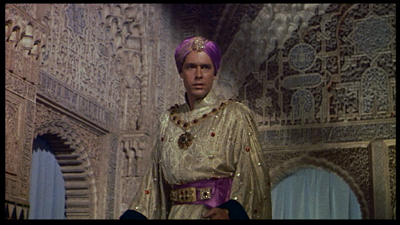