A spoof of the Robin Hood legend, this Mel Brooks movie takes the usual scattershot approach, with a lot of specific digs at the big-budget, Kevin Costner-starring Robin Hood: Prince Of Thieves.

Cary Elwes takes on the title role, and he's excellent, not least because "unlike some other Robin Hoods", he can speak with an English accent. He starts to cause trouble for Prince John (Roger Rees) and the Sheriff of Rottingham (Richard Lewis) while also winning the heart of the lovely Marian (Amy Yasbeck). Lending Robin some support are a blind manservant named Blinkin (Mark Blankfield), a young man named Ahchoo (Dave Chappelle), Little John (Eric Allan Kramer) and Will Scarlet O'Hara (Matthew Porretta), all willing to become the titular men in tights. Tension rises, fights are fought and everything builds up to a climactic battle in which Robin Hood hopes to right a lot of wrongs.

It may be unfair to compare the later work of Mel Brooks to his earlier successes, but it's inevitable whenever he releases another parody, thanks to Blazing Saddles and Young Frankenstein remaining perfect examples of the format. This film is not as good as those superb titles, but it's goofy and endearing enough to please fans of the director's style.

The cast is great. Elwes is very funny in the leading role, keeping a straight face while involved in some amusingly ridiculous exchanges. Richard Lewis and Roger Rees do more obvious clowning around, but they have fun with their roles, a fun that's infectious thanks to the enthusiasm of everyone involved. Mark Blankfield is okay, used for a number of obvious gags, while Dave Chappelle is his usual energetic self. Amy Yasbeck makes for a fine Marian and Megan Cavanagh is the maid/nurse trying to keep the lady pure.

Written by Brooks, Evan Chandler and J. D. Shapiro, the script includes some fun musical moments, plenty anachronisms included for comedic effect, a fun, small role for Tracey Ullman (who lusts after the Sheriff of Rottingham) and a wonderful moment that allows Robert Ridgely to reprise his role from Blazing Saddles. Dom DeLuise, Dick Van Patten, Isaac Hayes and Patrick Stewart all join the madness.

This may be a lesser Brooks movie, but it will still make you laugh on a number of occasions. Which is more than can be said about some other spoof/parody films from the past two decades (*cough* Friedberg/Seltzer *cough*). 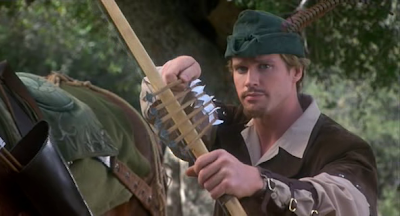