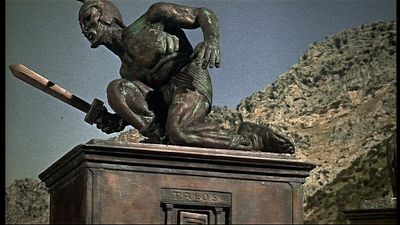 Jason And The Argonauts is, to me, the best of the movies featuring the work of Ray Harryhausen. Oh, there are a few other films vying for the top spot, but this one wins, in my opinion. Every creation onscreen here isn't just up to the usual high standard that people came to expect from Harryhausen, each one is a classic involved in a classic sequence.

The story is all about Jason (Todd Armstrong playing the Greek hero) and his crew of good men braving the perils that stand in their way as they sail away on the Argo to seek the legendary Golden Fleece. They are alternately helped and hindered by gods (mainly Zeus, played by Niall MacGinnis, and Hera, played by Honor Blackman) as they face the mighty statue of Talos, some horrible harpies, clashing rocks, unexpected treachery and much more.

Pretty much essential viewing if you're a fan of sword 'n' sorcery movies, Jason And The Argonauts only makes one or two minor mis-steps on its fantastic journey. The fact that the whole thing is a game being played out by the gods is one annoyance (especially when the real reason for the quest is forgotten) and the very final moments of the film prove, perhaps inevitably, anti-climactic after such a memorable sequence involving battling skeletons brought to life from the teeth of the Hydra. 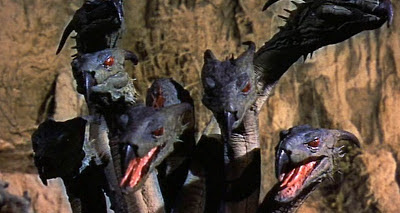 The acting from all concerned is just fine. Todd Armstrong may not be the most memorable leading man, but he puts himself over as a good, kind leader. MacGinnis and Blackman are fun as the two main gods keeping an eye on the quest, Nigel Green is fine as Hercules, despite his limited screentime, Gary Raymond is okay as Acastus (the son of an enemy who has managed to get himself in the crew) and Laurence Naismith gets to play the man who built the Argo. There's also the lovely Nancy Kovack, who arrives just in time to fall for Jason and become involved in the big finale.

Director Don Chaffey does a good job, working from the screenplay by Beverley Cross and Jan Read, and there's very little to fault. The pacing is perfect, the dialogue does what is required, and everything is designed to move the characters from one spectacular set-piece to the next. For me, this remains the pinnacle of Ray Harryhausen's work, despite strong competition from those Sinbad movies, and if you haven't seen it already then I suggest you get to it as soon as possible. It's held up as a classic of the fantasy genre for good reason, because it IS one.