Near Dark is a revisionist vampire movie from director Kathryn Bigelow, who also co-wrote the script with Eric Red, that didn't really do as well as it should have upon its initial release for one main reason*. The Lost Boys. I have made peace with the fact that I love both movies, but back in 1987 it was The Lost Boys that had the mass appeal, that quickly wormed its way into the popular culture of that generation (thanks to the hot stars and the cracking soundtrack) and that ruled the box office roost. Thankfully, Near Dark never disappeared, thanks to a small, loyal fanbase that would continue to recommend the film to those who had missed it while being dazzled by Keifer Sutherland and Jason Patric.

A small, loyal fanbase, however, can only do so much for any movie. What ends up gaining a film a cult following is usually one thing, it's really quite a good film. Okay, there are also terrible films that gain cult followings so there are two things. The film has to either be really good or really bad. Near Dark is really good. REALLY good.

It starts off with a young man named Caleb (Adrian Pasdar) picking up a lovely young woman named Mae (Jenny Wright). Enjoying the company as he drives Mae home, Caleb then tries his luck for a kiss. He stops and won't go any further. Mae ends up biting Caleb, and then things get strange and dangerous as Caleb gets pulled into Mae's "family", a group of vampires who initially consider just killing Caleb but then decide to give him a chance. IF he makes his first kill within the allotted time limit then he will join them. If not, he'll be killed. Confused, ill, repulsed and worried, Caleb just wants to get home.

With an absolutely fantastic cast (many of whom helpfully taken from the cast of Aliens), a nice mix of vampire genre elements with some Western tropes and an aesthetic arguably unmatched by anything else in Kathryn Bigelow's impressive filmography, Near Dark is an easy film to recommend to horror fans after something that reeks of quality. A lush score from Tangerine Dream, and other musical treats such as a cover of "Fever" by The Cramps, as well as a script full of some fine one-liners makes this just as pleasurable for the ears as the eyes. The film takes its time in between the memorable set-pieces and there are one or two ideas that may not sit well with those who like things a bit more traditional, but neither of those things bothered me at all.

Pasdar and Wright are easy to like as the ill-fated lovers. Lance Henriksen and Jenette Goldstein are both at their best in their sorta-parental roles, Jesse and Diamondback, respectively. Bill Paxton puts his shit-eating grin (sorry, I can't think of a more appropriate phrase in this instance) to its best use as the obnoxious and dangerous Severen and young Joshua John Miller proves constantly fascinating as the young boy, Homer, with mood swings varying between a need for childish companionship and a thirst for blood. Tim Thomerson (who will always be Jack Deth to me and so many others) plays the concerned father of Caleb and Troy Evans has a very small role as an undercover policeman.

At the end of the day, this is the most important thing to remember: it's okay for you to own, and love, The Lost Boys. But you should really leave room on a shelf for Near Dark too.

*There WERE other reasons, but the simplistic approach suits my simple mind. 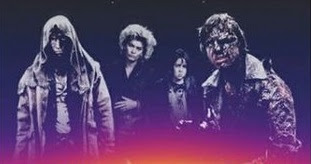