I know, I know, I'm late in marking the passing of this great man.

That's because I tend not to do these things. I don't write many notices about those who have shuffled off our mortal coil and I don't ever set out to overemphasise the impact that any individuals had on my life (the last death that made me struggle to voice how influential the person had been was that of James Herbert).

This note isn't a look back at the life of Harryhausen, it's not full of facts and figures that I'd just have to look up online anyway. This is just a brief note to say that over the coming weeks I will, as tribute to the man, be revisiting and reviewing as many of his films as I can get my hands on. I'll be covering the biggies, of course - Clash Of The Titans, Jason & The Argonauts, the Sinbad movies - but I'll also be trying to cover some of his earlier works and also one or two of the movies that fired up my love for film at an early age. Mysterious Island is essential viewing, as is The Valley Of Gwangi. Both of these movies, though perhaps seen as lesser Harryhausen films, will forever hold a place in my heart. I first saw them on British TV on a dull Sunday afternoon and they have always held that association ever since. In fact, I have no doubt that when I watch these movies on any day other than a Sunday I will end up feeling both comforted and confused.

I can't write a full piece about the man who made these monsters. I didn't know him, I've not read up about him, I wasn't even aware of his name when I first encountered his creations. But I can write reviews of those movies that livened up my childhood, especially now that I DO know the name of the man responsible for the harpies, the fighting skeletons, that moving statue of Talos and much, much more.

Feel free to reply with your own thoughts on each movie, of course, and let's spend the remainder of May reclaiming some of our childhood memories. 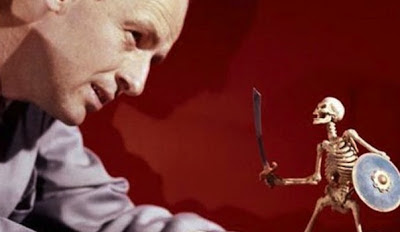 Email ThisBlogThis!Share to TwitterShare to FacebookShare to Pinterest
Labels: clash of the titans, fantasy, jason and the argonauts, mysterious island, ray harryhausen, sinbad, stop motion, the valley of gwangi