A lot of people view this as the best of the three Sinbad movies that showcased more great work from the great Ray Harryhausen, but I disagree. It's very good, it has at least one definite contender for best Harryhausen creation ever (a lively statue of Kali) and it also benefits from the presence of the stunningly gorgeous Caroline Munro, but it just falls flat in between the set-pieces, for me, in a way that the previous film managed to avoid.

Sinbad (this time played by John Phillip Law) in on his ship when he spies a flying beastie that's holding something that looks valuable. So he shoots an arrow at the thing and collects what is dropped, which happens to be a golden tablet. He immediately wears the thing around his neck and then goes to sleep the sound sleep of a man who can shoot small creatures and take their riches. While sleeping, his ship is thrown off course by a storm that I like to think is an externalisation of Sinbad's troubled conscience, but is more likely to have been caused by a bad man named Koura (Tom Baker). Sinbad meets Koura when he ends up in a coastal town. Koura would like the tablet/amulet, Sinbad refuses and Koura has to disappear when the Grand Vizier (Douglas Wilmer) and his men appear. The Grand Vizier relates a legend to Sinbad. The tablet is one of three pieces. The three pieces put together create a map to the Fountain Of Destiny and whoever gets to the fountain and puts the three pieces of the tablet/amulet in there will receive "youth, a shield of darkness, and a crown of untold riches." That's enough to convince Sinbad that he should travel with the Grand Vizier and see if the legend is true. Before heading back to see he adds a lazy young man (Kurt Christian) to his crew, after some persuasion from the lad's father, and a beautiful woman he frees from slavery (Caroline Munro). The journey ahead will not be easy, mainly due to Koura following close behind and doing his damnedest to reclaim the key to great rewards. Unfortunately, each bit of black magic that he performs drains away some more of his life force.

This time around it's Gordon Hessler in the director's chair and Brian Clemens on scripting duties, but Mr. Harryhausen remains the one constant. His contributions here include two of the very best stop motion creatures to come from his imagination, with one being a wooden figurehead brought to life and the other being that aforementioned statue of Kali, with all six arms wielding a sword.

John Phillip Law is okay as Sinbad, but it's always more fun to watch the wonderful Tom Baker in his villainous role or just soak up the beauty of Caroline Munro. Kurt Christian provides the comic relief, Douglas Wilmer and Martin Shaw do their bit, but the more important thing to remember is that there's also a one-eyed centaur, a griffin and a few other magical creatures onscreen to keep things entertaining.

The Golden Voyage Of Sinbad has all of the ingredients to make for a fun adventure - the magic, the exotic, fictional locations, the menagerie of opponents for the hero to overcome, the Caroline Munro - so it's an easy film to recommend to those who enjoy this kind of pure escapist fantasy fun. It just doesn't hit the heights of other Harryhausen films, for me, though I'm almost certain that I'm in the minority with that opinion. 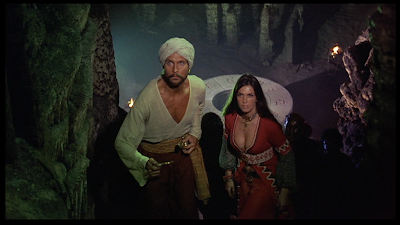