It's the return of Professor Bernard Quatermass, in case you couldn't guess that from the title, in this Hammer movie that is again based on a TV series written by Nigel Kneale. Val Guest is back in the director's chair, after doing justice to the character and material in The Quatermass Xperiment, and everything is in place for another slice of low-key sci-fi drama.

This time around, Professor Quatermass (Brian Donlevy in the role once again) becomes involved in a mystery that involves meteorites causing a fair bit of trouble for those who get too close to them. The meteorites have all been landing at an area known as Winnerden Flats, but when Quatermass gets there (with his colleague, Marsh, played by Bryan Forbes) he finds more than he bargained for. As the plot thickens, Quatermass is told that what he saw at Winnerden Flats wasn't just a design very similiar to his own plans for  a moon colony but actually a plant where artificial food is being made. Quatermass finds this hard to believe, but finding out just what IS going on could prove very difficult. Time is against him, as are a number of people who no longer seem in control of their own minds.

Thanks to his character being slightly less arrogant in this outing, Brian Donlevy fares better in the main role than he did the first time. He is the pursued as opposed to the pursuer in this tale, seeking help from others as opposed to nominating himself as the one and only chance of fixing a situation. John Longden is very good as Lomax, someone who might just be the help that Quatermass needs, and it's great to see Sid James in a fairly straight role, playing a reporter named Jimmy Hall who likes to drink a bit too much, but works best when all sobered up. The rest of the cast includes William Franklyn, Vera Day, Charles Lloyd Pack and Hammer stalwart Michael Ripper. They may not all get to play particularly memorable characters, but the performances are just fine.

It may not feel quite as quintessentially British as the first movie, but this is a fine sci-fi drama with a fair share of thrills, one or two decent shocks (okay, nothing in the movie shocks nowadays, but back in 1957 this could have been gasp-inducing stuff) and a nice development of the plot that keeps it all entertaining enough to stop viewers from picking over the implausibility of it all. While it's not on a par with the first movie in terms of intelligence and tone it remains an equally enjoyable piece of entertainment. 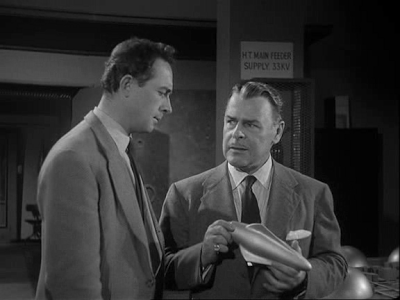