Something a bit different for Shudder Saturday this week, I was reminded to check Deadwax out while listening to the hosts . . . "wax lyrical" about it on the Strong Language & Violent Scenes podcast some time ago. And after listening to writer-director Graham Reznick give his best defence of the woeful Poltergeist III I knew that I had to check out his work.

Split into eight different episodes (or tracks, if you like), ranging in length from about 10 minutes to about 15 minutes, Deadwax is the tale of a powerful vinyl record that cam kill those who hear it. It was allegedly recorded by someone who died during the process, the sound of his "transition" captured, but isn't the only powerful record they recorded. There are also three key records, to be listened to simultaneously, that provide sounds never before heard by the living. These records, and those who have the misfortune to stumble upon them, also bring together a police officer (Len, played by Evan Gamble) and someone who specialises in finding rare records for her client (Etta, played by Hanna Gross).

Although the plot revolves around a very familiar horror trope (the powerful and evil work of art that can drive humans to madness and/or death, here it is in the form of vinyl albums, but it has previously been in the form of paintings, books, and movies), Deadwax has enough care taken with it to make it quite the treat for genre fans.

Reznick is quite the audiophile, something that resonates (no pun intended) throughout every chapter of this tale. That seems obvious, of course, in a story with this plot but it's not just sequences involving the featured records that place emphasis on the sound work. This feels very much like an audio piece, first and foremost, something that has been built up, layer by layer, until Reznick is finally content to then position the dialogue and visuals over the top of everything. Thanks to the contributions of everyone involved, it feels like he has made the album he always wanted to make. In visual form.

The cast all do fine, with Gamble and Gross being decent, if unspectacular, leads. Kirk Bovill is better, although only in one episode, as a young DJ who ends up providing a lot of backstory, building up the legend, there are fun turns from Yuki Sakamoto and Ted Raimi as two people who know more than most about the record, and Tracy Perez does well in her main supporting role (as Lana, the partner of Etta).

An enjoyable experience, overall, and one that totals up to the average runtime of a movie, Deadwax would benefit from some more moments of creepiness, or even just a few extra cheap scares here and there, but is an admirable attempt to take old ingredients and make something a bit fresh. I'll be interested to see what direction it goes in if a second season is developed, although this first run feels nicely self-contained.

Play some records on this.
Americans may want to pick up this. 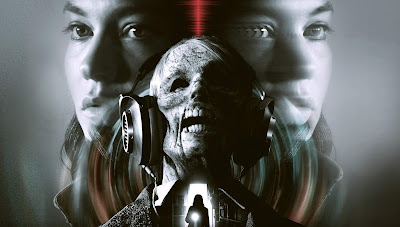