IF you don't mind his presence in films, Jack Black has spent the past 10-15 years steadily building up a great selection of family-friendly adventure films. Okay, I'm the only one who enjoyed Gulliver's Travels but most people seemed to enjoy the Kung Fu Panda movies, School Of Rock, Goosebumps, and Jumanji: Welcome To The Jungle. And here's another to add to the list, a film full of magical delights that is an unexpected directorial effort from Eli Roth (a man more well-known for his gory horror movies and twisted thrillers).

Owen Vaccaro plays Lewis Barnavelt, a young boy who ends up going to stay with his eccentric Uncle Jonathan (Black) after his parents die in a car crash. Uncle Jonathan lives in a very strange house, is himself a very strange individual, and has a good friend in the shape of the very strange Florence Zimmerman (Cate Blanchett). There's a lot of magic being bandied around, and Lewis wants to learn how to use it as soon as he sees it happening, and that clock in the walls, a device placed there by a warlock for reasons unknown. But it's counting down to something, and that something can't be good.

Based on a John Bellairs book that was first published in the early 1970s, The House With A Clock In Its Walls manages to feel surprisingly fresh and fun, despite not being entirely dissimilar to so many other movies we have seen aimed at children in the post-Potter entertainment years. A large part of that is to do with the cast but it's equally down to the surprisingly spot-on handling of the material by Roth, working from a script by Eric Kripke. This is not a film concerned with mystery and personal discovery, it's a film about magic. Young Lewis finds out about it quite quickly, making it a very normal part of his life for most of the movie, and the fun and thrills come from that magic being used, and from a third act that culminates with the final ticking and tocking of the clock.

Black is as energetic and amusing as he usually is (IF you like him, those who don't will want to find some other viewing choice), and Vaccaro is perfectly likeable in his main role, but it's always a lot of fun to see Blanchett in a lighter role, and she's her usual wonderful presence here. You also get Lorenza Izzo in a small, but important, role, and Renee Elise Goldsberry and Kyle MacLachlan as the two main characters who want to be there when the clock finishes the countdown. Colleen Camp is a neighbour who witnesses some odd stuff going on, Sunny Suljic play a boy who befriends Lewis, but may just be using him, and there's an array of enjoyable CGI creations that have fun personalities of their own (the best being a pet armchair that acts like an excitable puppy).

You can probably already guess the main problem that the film has. It's just too similar to so many others that we've seen over the past decade or so. The fantastical elements don't quite go as far as they could, it lacks some tension, and the grand finale feels more like an afterthought. There are also some toilet humour gags that don't feel in line with the rest of the film, just a couple of them but they're in there. These things aren't enough to spoil the whole movie, they just drag it down slightly.

Roth will always have his detractors, no matter what genre he tries his hand at, as will Black, so that also provides a lot of people with more reasons to give this a miss. I think it's worth your time though, especially if you have children at just the right age for it (probably between 6-14 being the optimum demographic . . . or anyone with the same mental age as me). 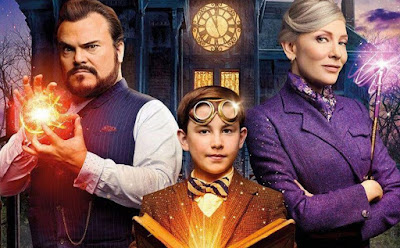