As Smash Cut played out I knew that I should be rolling my eyes and grimacing at the mix of awful comedy and ridiculous gore I was watching. I knew that, I really did. But I enjoyed myself. The film wasn't good, by conventional standards, but it featured some familiar faces being silly and appearing to enjoy themselves and that was infectious. Of course, many other things are infectious that people don't want passed on to them so I'll forgive you if you decide to avoid this one.

David Hess plays a director who has had enough. He's often shafted by money men, he can never get onscreen what he actually envisions in his mind, audiences laugh at the end results and the critics have a field day as they shred his reputation. When he accidentally kills a young woman (Jennilee Murray) he realises what he needs to make his masterpiece. Real blood and gore. Real death. Reel death. But as he tries to get his film finished he is being watched by an undercover reporter (Sasha Grey) and a private detective (Jesse Buck).

An overt homage to the films of Herschell Gordon Lewis (the man himself has a cameo role and is the source of some choice quotes at the very beginning of the film), this is a cheap and cheerful slice of splattery madness. The script by Ian Driscoll isn't great, by any means, but it does have some amusing lines and references for fans of Lewis. The direction by Lee Demarbre is pretty slapdash, which is, of course, in line with the essence of the whole enterprise.

Hess goes over the top whenever he gets the chance, which is in almost every scene, poor Michael Berryman appears in a few scenes with a wig so horrendous that I started to suspect it may actually be an escaped Tribble and Mr. H. G. Lewis is really the only one of the big horror names to survive his limited screentime with dignity intact. Sasha Grey isn't terrible, but that may be more down to the fact that I've been, ummmmm, a fan of her work for some time as opposed to her acting skills. Jesse Buck basically gets to lark around for the entire movie, and he does okay. I guess. There are other actors, but none giving performances worth highlighting.

If you like the movies being homaged then you should get some pleasure from Smash Cut. If you don't, I encourage you to choose something - anything - else. 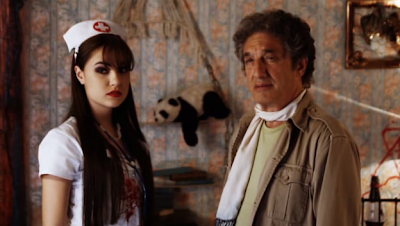 This review, and many more, appear in my shiny e-book. Every copy of my book sold gets a few pounds in my pocket, and gets you a good read (if I say so myself).