For his third directorial feature, Ralph Fiennes would seem to have edged further into more challenging territory with this look at the life of ballet dancer Rudolf Nureyev, the development of his talent and the building tension that led to his defection to the West. But that's not entirely true. Although I am sure he stretched himself to develop the ballet sequences, this is just far too by-the-numbers stuff that shows a man remaining well within his safety zone.

Oleg Ivenko plays the lead, with Fiennes himself also onscreen as Pushkin, a man who helps him to be the best he can be, and the behaviour of Nureyev is familiar stuff. He's arrogant, he rubs many people up the wrong way, and he has to overcome a number of major problems on his way to becoming the most famous male ballet dancer in the world (certainly to an uncultured layman like me).

Fiennes, either through lack of confidence or some unwise choices, never allows this to lift up as it should. Okay, it's about a crucial point in the life of Nureyev, but viewers should still know just how good his talent is, and that rarely comes across onscreen, despite the efforts of those involved to show some technical skill. Most of the time, we know that Nureyev is the best at what he does because he says that he is the best.

The script, by David Hare, feels far too meandering when it should be focused either on Nureyev's talent or the events being set in motion around him that he remains ignorant of until it's too late. The grand finale of the film is dramatic and tense, with viewers finally realising the very real and weighty stakes at play, but it's a case of too little too late.

It's all competently put together though, with enough there to make me want to check out the source material by Julie Kavanagh (her book about Nureyev being the inspiration), but there are enough minor failings and mis-steps to make this seem like a first attempt by Fiennes to sit in the director's chair.

It doesn't help that, I assume in an attempt to assemble a cast mixing talent and authenticity, very few people stand out in the acting front. Ivenko is quite poor, but he seems to have been picked more for his ability to emulate some dance moves than actually act, as is Adèle Exarchopoulos, playing a young woman who becomes Nureyev's closest friend, and it doesn't help that they pale in comparison to the performances from Fiennes and Chulpan Khamatova (playing the wife of Fiennes' character). Olivier Rabourdin and Raphaël Personnaz do decent work, playing two men who impact the life of Nureyev in very different ways, but nobody else stands out, unless it's for the wrong reasons.

I'm sure there's a great film to be made about Nureyev. Sadly, this isn't it.

The disc will be available here.
Americans may want to pick up some red shoes. 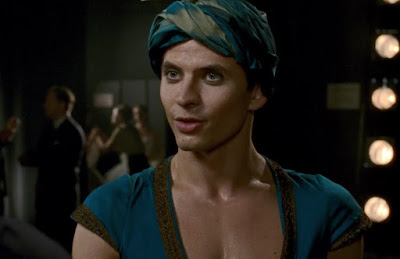