The final feature film to showcase the stop-motion creations of the great Ray Harryhausen, Clash Of The Titans may not be the very best film that he would be a part of, but there's no denying that it's a fantastic swansong full of magic and wonder.

It turns out that in olden times Zeus (Laurence Olivier), as well as being the big cheese among the gods, was a bit of a horndog. He was a bit of a player. When a woman that he seduced is cast out to sea with her (and his) son, he takes revenge by unleashing the kraken and ensuring that the woman and child wash up safely on another shore. The boy grows up to be Perseus (Harry Hamlin) and he finds himself in the middle of some trouble as some gods - mainly Thetis (Maggie Smith), looking for revenge after Zeus showed no mercy in the punishment of her own son, Calibos (Neil McCarthy) - decide to stir things up a bit for both himself and Zeus. Zeus, seeing the path that Perseus is being led down, at least ensures that his son has a fine shield, a helmet that can make the wearer invisible and a magic sword. Before you can say "clockwork owl" things get out of hand and Perseus ends up having to race against time to find a way to stop the kraken appearing once again, this time to snatch up his love, Andromeda (Judi Bowker).

Directed by Desmond David and written by Beverley Cross, Clash Of The Titans is a spectacular film that might run for almost two hours in length, but packs plenty into every sequence. The fact that there are a number of creations here - Pegasus, Calibos, the kraken, Medusa - that are amongst the best that Harryhausen ever made adds immeasurably to the proceedings.

Harry Hamlin is fine in the role of Perseus, and the supporting cast is full of those already listed plus the likes of Ursula Andress (don't blink or you may miss her fleeting appearance), Pat Roach, the ever-wonderful Burgess Meredith, Sian Phillips and Tim Piggott-Smith, but none of those names are important. Even the mighty Laurence Olivier is forgotten when the action set-pieces take place and our hero looks to be in a tight spot.

The pacing isn't perfect, the script walks a fine line between the intentionally mythical and the unintentionally mirthful, and it suffers in comparison to what else was being done by the start of the 1980s, but it's a fantastic and fitting end to the visual effects career (though not his movie career) of a man who pioneered so many tricks and inspired the imaginations of so many in the film business today. 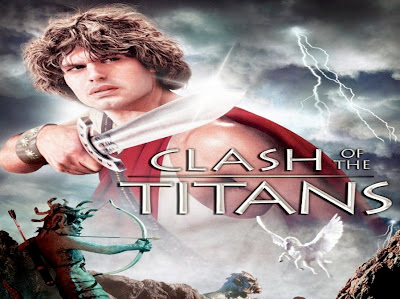