Ho-leeeeeeee crap! Wow!! Goddamn!!! And other such exclamations of genuine shock and surprise. Inside is one mad, intense, brutal, wild horror movie and if you're a genre fan with a strong stomach then you should check it out as soon as possible. But make sure you really DO have that strong stomach.

Directors Alexandre Bustillo and Julien Maury, almost from the off, mark themselves out as talents to watch in the future. The premise of the movie is simplistic enough (a heavily pregnant woman is terrorised by a strange woman the night before she is due to head into the hospital and have her baby) but the execution is absolutely fearless and astounding.

Alysson Paradis is the poor, terrified mother-to-be while Beatrice Dalle (still Betty Blue to many who grew up with that poster on their wall) plays the mysterious woman doing the terrifying. There are others who appear on the scene but this movie really isn't about the acting, although I never noticed anyone putting in a bad performance, however small the role.

This movie is about the bloodshed, the carnage and the unrelenting build up of terror. I can't remember the last time I felt quite so tense while watching some poor saps in a horror movie approaching their, possibly fatal, fates. This movie had me on the edge of my seat from start to finish and also had me wincing numerous times when the camera showed some of the more painful moments in far too much detail for comfort.

This is certainly not for those who dislike the horror movies that "show too much" but I should just add that there IS a decent story lurking under the streams of blood and viscera. It may be flimsy but it's there and it actually adds to the dynamic of the movie, making a rewatch a surprisingly enjoyable and rewarding (well, sort of, you know what I mean) experience. 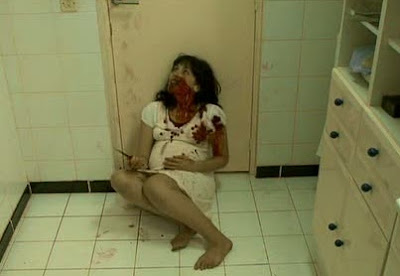