Buster Keaton was a great film-maker, as pretty much everyone acknowledges, and Sherlock Jr. is another one of his great films. According to everyone who had seen it before I did. Yet, ten minutes into Sherlock Jr. I started to wonder why I wasn't loving it. It was good, but not great. Thankfully, within moments I was changing my mind. Those initial ten minutes were required to establish the characters and plot. After that, it was nothing but inventive brilliance for the remaining half hour.

The plot involves Keaton as a projectionist who is also studying how to be a detective. He's in love with a girl (Kathryn McGuire), but the girl has also caught the attention of a slick, villainous sort (Ward Crane). When a watch is stolen from the girl's father (Joe Keaton) and the ticket for its sale found on our hero, who has popped round to deliver chocolates and a proposal, he is told to leave and never return. He heads back to his job, and once the film begins he quickly dozes off. Which is when he becomes Sherlock Jr. and begins an adventure that starts with him entering the cinema screen and ends with a fantastic chase sequence.

Simple, yet brilliant. That's what Sherlock Jr. is. The story, created by Jean Havez, Joe Mitchell and Clyde Bruckman, is an excuse for numerous flights of fancy, but they're so perfectly executed that everything happening onscreen remains almost as fresh and impressive as it did almost 90 years ago.

Highlights include that perfectly edited sequence in which Keaton is first getting used to life in the projected movie, and an absolutely wonderful game of pool that features one rigged ball ready to explode, but it's all a sheer delight once that first section sets everything up and segues into the fantasy that makes up most of the movie. 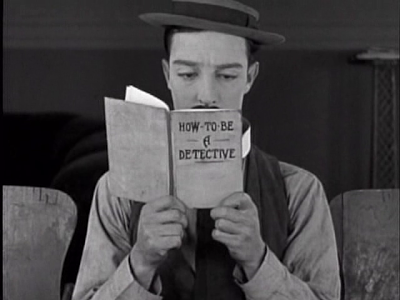