Oh well, it happens every now and again. Probably quite often, if I'm entirely honest. A movie will come along that lots of people rave about, and I just end up wondering why it managed to garner so much praise. Almost Human is a film that you may have heard about already, especially if you're a horror fan. It's a low-budget, independent, sci-fi horror that went down well at numerous festivals during the last year or so. And it just didn't do anything for me.

The plot pilfers from a great variety of titles (the filmography of John Carpenter, the superb Xtro, any "body snatchers" flick) as Mark (Josh Ethier) is rudely interrupted at his home one evening by a panicked Seth (Graham Skipper). Seth has lost one friend already that evening, and wants to find somewhere safe. He's rambling about something implausible when a loud noise causes them some discomfort. Then Mark goes outside and disappears. Two years later, Mark returns. Which doesn't bode well for Seth, Jen (who was Mark's girlfriend at the time), or anyone else in the immediate vicinity.

Written and directed by Joe Begos, I won't deny that there's some good stuff here, considering the small budget that he was working with. However, a small budget is no excuse for such a slim viewing experience, a movie that seems to overstay its welcome by a good 20 minutes or so, despite not being that long in the first place.

The script is weak, the acting is in line with the script (Vanessa Leigh, who plays Jen, and Skipper have some moments that are better than others, but they don't do enough to earn their sizable amount of screentime), and the homages start to pile up so thick and fast that viewers may, as I did, just start to wish that they're revisited one of the many classics referenced instead.

A weak script and weak acting isn't something that puts me off a horror movie though. Let's face it, we horror fans are used to such things, and they sometimes make the movies more enjoyable. If the movie had enough elsewhere to compensate then all would have been fine. Some tension can be a bonus, as can some good gore. And let's not underestimate the redemptive power of some gratuitous nudity. Almost Human can't even deliver the goods in those departments. Others have praised the practical effects, but they left me cold because a) they weren't THAT good (although, admittedly, they were good for the budget) and b) there weren't that many of them to enjoy. Of course, with so many people disagreeing on that point, you may as well be safe to assume that I'm in the wrong. But don't say you weren't warned IF you end up left as cold as I was.

It's a tough call. I'm glad that Begos made this movie, and made it in the way that he did. He shows potential, despite the many flaws that stack up during the film. Yet I still can't say that I actually liked it, and I don't think I would even be able to label it as average. Some moments bored me, some moments irritated me, and very few moments actually entertained me. 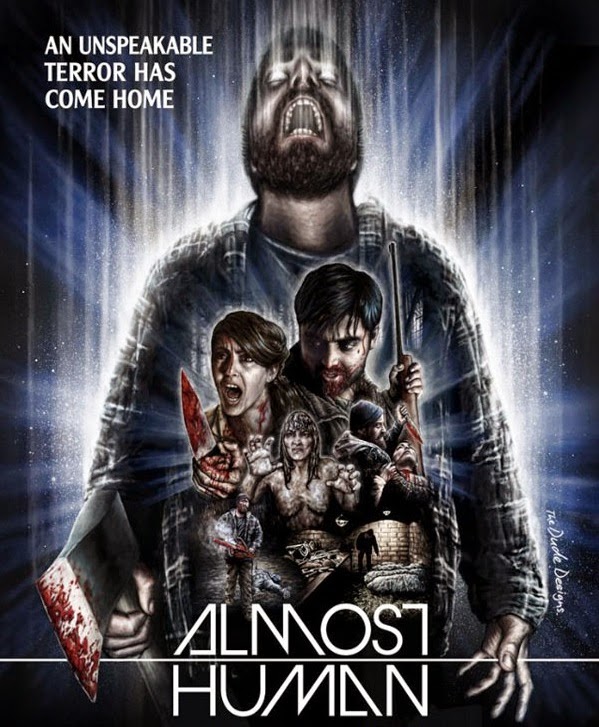 If you like this blog (yeah, if you can admit to such bad taste), or have been pointed towards a decent movie by any reviews here, then please feel free to head on over to Amazon and grab a copy of my e-book, TJ's Ramshackle Movie Guide. I assure you that it's good value and, more importantly for me, every copy purchased puts a pound or two in my pocket, and helps me to show my wife that I'm not wasting my entire life.

As much as I love the rest of the world, I can't keep up with all of the different links in different territories, but trust me when I say that it should be there on your local Amazon.
Posted by Tylerandjack at 09:30