Blacula was a big success when it was released in 1972. So, as expected, a sequel was quickly created. And it is, also as expected, not quite as good as the first film. It's not bad though. Not bad at all.

William Marshall returns to the title role, once again bringing such a great presence and certain dignity to the role. He's resurrected by a young man (Willis, played by Richard Lawson) who wants to become a leader in his voodoo circle. That doesn't go to plan. Willis is instead almost immediately bitten and ordered to stay within the confines of his own home. Meanwhile, Mamuwalde (AKA Blacula) starts to venture out into the night once more, quickly falling for the lovely, and voodoo-wise, Lisa Fortier (Pam Grier). Perhaps the magic that brought him back to life can cure him of his vampirism.

Writers Joan Torres and Raymond Koenig also return, joined this time around by Maurice Jules, and they continue to use the main character in a mixture of traditional vampire moments and also scenes that let him angrily call out situations that he sees around him (specifically when it comes to how people treat one another, as well as how valuable heritage and history are).

It's Bob Kelljan in the director's chair, taking over the role from William Crain, and he does a decent job. Although the film lacks the freshness of the first film, obviously, it makes up for that with the added voodoo elements and a handful of vampire moments that come very close to being genuinely creepy. This may be due to the fact that Kelljan had already given audiences the Count Yorga movies (which, as of this moment, I have yet to watch - sorry, not enough hours in each day). The third act is also almost on a par with that of the first film, walking a familiar path, but with just enough of a twist to avoid it feeling like a carbon copy.

Marshall is just as good here as he was in the first movie and, having recently rewatched that film (before getting to this one), I wouldn't expend too much energy arguing with anyone who wanted to hold him up as one of the best incarnations of Dracula, even if he's a successor to the title rather than the, ummmmmm, original fangster. Grier is good enough in her role, although she's not at her very best (the really good stuff is saved for her leading roles in this era). Lawson suffers from the script making him too weak and whiney, but Don Mitchell manages to even things out with his fine turn, playing the man who puts two and two together and comes up with a batty result.

I was tempted to rate this even higher, placing it much closer to the first film, but I ultimately realised that there's not much in the first hour of the film that comes close to some of the great moments in the finale. There's a lot to enjoy, here and there, but it's only the last 10-15 minutes that show how much more could have been done with the premise. Well worth a watch if you enjoyed Blacula, but it doesn't really avoid many of the standard sequel problems (especially when it comes to the plotting, which is copied almost beat for beat).

The double-pack can be bought here.
Americans can get the movies here. 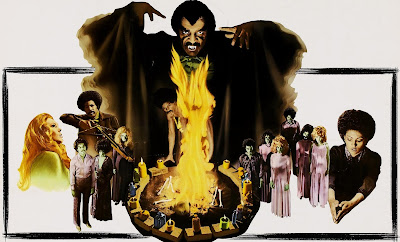