Brightburn can be summed up very easily in one sentence. What if Superman was evil? That's really all there is to it. Comic fans will already have some idea of what happens in that instance, because it has been done on a number of occasions. I'm not sure if it has been done quite like this though, with the real turning point occurring with our main character as a child, just figuring out who/what he is and then immediately starting to use his powers to get revenge on people he wants to lash out at.

Elizabeth Banks and David Denman are Tori and Kyle Breyer, a couple who have been unsuccessfully trying to have a child for some time. So they think their prayers are answered when something crash lands near their farm and they find a baby. Years later, all still seems to be going well, and young Brandon (Jackson A. Dunn) is growing up much like any normal boy. Except he isn't a normal boy. And he is starting to figure that out. He cannot be cut by normal blades, he can blast heat rays from his eyes, he can be superspeedy, and, of course, he can fly.

Written by Brian and Mark Gunn (the former being a brother of James Gunn, the latter being his cousin), this is a film that would seem to have come along at the perfect time to entertain both those feeling that the superhero films are oversaturating the cinema screens and those who simply want an unpretentious, gory horror movie. Unfortunately, the timing hasn't been reflected in the box office, which was pretty poor when it opened over in America (although, to be fair, it was the much smaller film sandwiched amongst some big hitters). Whatever the numbers say, this is a pretty great twist on familiar material. The Gunns don't take long to start building the tension and, once the establishing scenes are out of the way, things move from one entertaining set-piece to the next, with young Brandon trying out his superpowers in different ways.

Director David Yarovesky hasn't done anything before this to make me take much notice of him, although he's definitely known members of the Gunn family for some time, with a couple of his previous jobs connected to the Guardians Of The Galaxy movies. He does well here, balancing a bleak horror aesthetic with imagery that feels akin to the iconography we have seen in comic book tales over the years. Brandon Breyer is a classic superhero-type name, in the Stan Lee mould, and the main character spends a good amount of time positioning his initials in a way that makes for an eye-catching emblem.

Banks and Denman are both really good as the concerned parents who see a situation spiralling dangerously out of control here, and Dunn is perfect in his role, wobbling between being confused about his place in life and absolutely determined to make the most of his superpowers and claim his position at the top of the "food chain", as it were. Meredith Hagner and Matt Jones are both good as the next two people closest to Brandon, and therefore the people in danger from him as he starts to leave death and destruction in his wake, and Emmie Hunter does well as a young girl who is the first to realise what Brandon might be capable of, thanks to his interest in her.

Not for the faint of heart, there are some moments of pain and gore here that will make even the most hardened horror movie fan wince, Brightburn knows exactly what it wants to be, knows what fans will want to see, and delivers everything you could want from it. I hope more people discover it, even if they wait until it's available for home viewing.

There's a disc going to be available here.
Americans will be able to get it here. 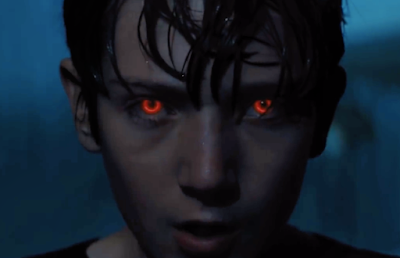