Okay, first of all, The Sadness may, for all intents and purposes, play out like a zombie movie, but it's not really a zombie movie. I don't really care, however, if anyone wants to label it as such. I'm still holding my position on that hill for 28 Days Later. But the characters who are "zombiefied" in The Sadness still seem to have will and intelligence, it's just that they are absolutely uninhibited by societal norms and morality, and their overriding urge is to indulge in every sadistic and depraved thought that they can imagine.

A stunning feature debut from writer-director Rob Jabbaz, and (as many others have already said) the closest we'll probably ever come to a filmed adaptation of Richard Laymond's One Rainy Night, The Sadness is a simple tale of two separated lovers (Jim, played by Berant Zhu, and Kat, played by Regina Lei) trying to survive and reunite with one another as the population around them becomes infected by a plague that spreads madness and death. Jim needs to avoid crowds of deadly strangers as he makes his way from one location to the next. Kat, on the other hand, finds herself targeted by a businessman (Tzu-Chiang Wang) while she tries to help a wounded woman named Molly (Ying-Ru Chen).

From a very quick start to a very tense finale, this is a film that doesn't let up for a moment. Any peace that characters find is fragile, and viewers know it is likely to be shattered within minutes. The opening scenes show the madness infecting people almost instantly, leading to various assaults and acts of self-harm/suicide, a pattern of behaviour that becomes the norm for the ever-increasing horde of the infected.

Jabbaz doesn't dive deeply into the backstories of the lead characters. He's smart enough to just show that they are in a loving relationship, and being apart from one another during such a dangerous time means that their main aim is to get back together and find somewhere safe to stay. He's also smart to make one villain, The Businessman, stand out from the others, of course, in a little trick that is often used in zombie/infected movies. The fact that The Businessman is SO determined to get to his potential victims, and can occasionally take a moment to verbalise what he wants to do to them, is an easy way to keep things more focused and intense than they might have been if the film just showed Kat and Molly trying to avoid one crowd after another.

Zhu is good in his role, and viewers stick with him for approximately the first quarter of the movie, but it's Lei who excels in what turns out to be the lead role. Although blindsided by the turn of events, and not looking as if she may last long in such a situation, her character keeps her wits about her, constantly trying to get the right people to help while she calculates the odds of survival, and Lei handles herself very well in the role, even as she is being soaked by more and more sprayed blood. Chen is also very good, hampered by an eye injury early on, and she is able to strike a nice balance with her character by making her understandably upset and in pain without having her ever become an irritation. Wang, that determined and depraved businessman, is an excellent main baddie, emanating pure evil throughout. Even his first scene, before he is infected, show someone with a core that isn't exactly overflowing with goodness and positivity, and Wang, like everyone else, seems to enjoy himself more as things get wilder and wilder. 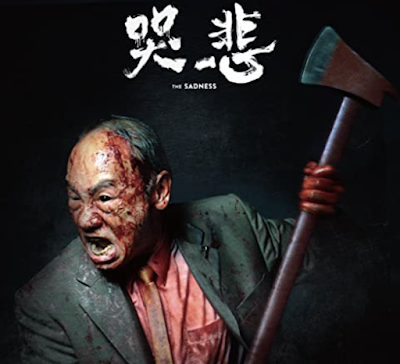