Doctor Strange In The Multiverse Of Madness (2022)

As many of you already know, Marvel have been setting up the multiverse for a little while now. And here we are, once again showing the possibilities and the dangers of the multiverse.

It all starts with an action sequence that shows Doctor Stephen Strange (Benedict Cumberbatch) dying while trying to help a young woman, America Chavez (Xochitl Gomez). America can jump from from one multiverse realm to the next, but doesn’t know how her power works, and she eventually ends up in what seems to be our world, where she is saved from a giant monster by . . . Doctor Stephen Strange, assisted by Wong (Benedict Wong). Powerful forces seem intent on destroying America, which leads to Doctor Strange asking for the help of Wanda Maximoff aka The Scarlet Witch (Elizabeth Olsen) . . . which actually ends up making everything worse. An ancient text could provide the key to fixing the whole situation, but that might need some more travelling between universes.

With the kaleidoscopic imagery throughout, elements of celestial horror, a nice line in macabre humour, and an inevitable Bruce Campbell cameo, Sam Raimi fans should be delighted by his return to directing superhero fare. The material, revolving around a quest for an ancient book that may save or damn mankind, feels like a natural fit, and there are a couple of genuinely glorious moments in the third act that show just how much Raimi was allowed to retain his Raimi essence. I can easily say that I enjoyed this more as a blockbuster Raimi movie than as a superhero movie.

The screenplay, written by Michael Waldron, does a good job of explaining the situations, characters, and rules without bringing everything to a grinding halt. Waldron has experience with multiverse-based entertainment, having been a writer on both Loki and Rick & Morty, and he excels when it comes to clarifying concepts that are then complemented by Raimi’s directorial decisions. He also does well while exploring an aspect that was kept out of a lot of the advertising on the lead up to the release of the film, something I won’t spoil here, and I was pleased to find that this was another Marvel movie that opted to question decisions made by main characters over the years, and to muse over who gets to decide what is ultimately good and bad.

Everyone does well in their main roles, with some people (mainly Cumberbatch, Olsen, and Rachel McAdams, once again playing the lovely, and beloved, Christine) clearly having some fun portraying multiple versions of their characters. And Cumberbatch can do the magic-creating finger/hand movements in his sleep by now, surely.  Gomez is a great new addition to the cinematic roster of Marvel main characters we have had so far, playing her character with a lovely mix of sadness, strength, and sass, and Wong has been one of the best supporting players in any of the MCU movies since his first appearance (although there are a number of actors who would deserve to be in contention alongside him). Chiwetel Ejiofor also needs to be mentioned here, with his character, Baron Mordo, being used in a way that allows him to do more than just be another potential enemy of Strange.

I’ve saved my main criticisms until the end though, because this is far from perfect. Some scenes are just too overstuffed, some of the dialogue, already embraced by a large part of the fanbase, is too hokey and trying too hard to become instantly quotable, and it’s easy to say that this isn’t the best recent multiverse movie release (which would be Everything Everywhere All At Once). It’s not even the best recent Marvel multiverse movie release though, with Spider-Man: No Way Home proving to be a much more satisfying end product. The reason? Cameos.

Yeah, let’s end this review by talking about cameos. Not Bruce Campbell. He is welcome in every Sam Raimi movie. And Spider-Man: No Way Home showed just how enjoyable the right cameos could be. Unfortunately, Marvel haven’t realised what they got so right there, cameos that allow them to work some interesting story strands together from their recent history into something that felt much more satisfying, and like closure for many, and go back to making the mistake of using cameos as obvious set up for whatever path they want to lay ahead. One major character aside, someone seen in the recent animated “What If?” show, all of these cameos made me roll my eyes and wish that I didn’t recognise any of the faces onscreen. It’s irritating, feeling like a way to tease people or test reactions to potential future (re)casting. And it sadly makes up what feels like a decent portion of the middle of the movie.

None of the negatives are enough to stop this from being a good time. There’s enough money and talent here that it would seem almost impossible to make something truly awful. But, as the film itself shows us, there are infinite possibilities. 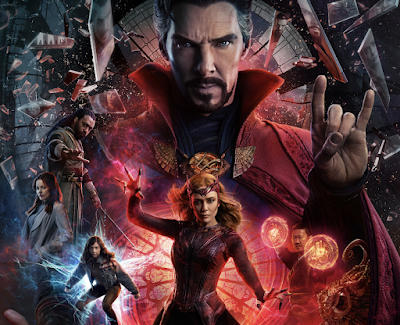