A modern spin on the kind of anthology movies that Amicus used to churn out years ago (there's even that old staple tale of the "haunted limb"), Cradle Of Fear puts a modern, goth coat of paint on things and throws in some more gore and nudity but it's quite a traditional piece of work at it's black heart.

The title of the movie is only a few letters removed from the band Cradle Of Filth and it’s their leading man, Dani Filth, who takes the role of the evil figure linking all of the four stories (although more is quickly revealed concerning an evil hypnotist/sadistic killer who seems to be getting revenge on those who helped to get him incarcerated).

The first story is all about a sexy clubber (Emily Booth) who meets up with a mysterious stranger and goes back to his for a night of passion. Things soon turn a bit dark and scary and the next day is one full of freaky imagery and a sense of foreboding as she worries about what has been done to her.
The second story concerns two young women robbing an old men and how that goes horribly wrong.
The third is the “haunted limb” tale already mentioned above. It features a man who wants to regain a full left leg and the woman in his life, played by Eileen Daly, who just wants him to be happy.
And last, but by no means least, we have a tale of internet horror with a young man who stumbles upon, and becomes obsessed by, a site known as The Sick Room. The site allows users to decide just how, where and how violently random victims are attacked while the camera keeps rolling.
Framing things, we have that deadly stranger (Filth) and the story of the cop (Edmund Dehn) determined to put a stop to the evil murderer/hypnotist known as Kemper (David McEwen).

Alex Chandon directs, from his own writing, and while the movie is far from perfect it actually turns into something very good after it’s shaky start. This is helped by the building of tension in the surrounding storyline and the lead-up to the best story of the four featured. It’s also helped by the fact that the movie tends to pace things just right and throws in some violence and/or nudity often enough to keep things constantly entertaining during the two hour runtime. Shallow I may be but the fact that I have a crush on Eileen Daly vastly improved the tale that featured . . . . . . . Eileen Daly and the first story having Emily Booth in it (the horror hostess who would make my “Top 5 women I could get a free pass with” list and I’d even get it laminated . . . . if only my fiancé didn’t mind) made the whole thing worthwhile anyway. Both of these lovely ladies being nekkid may seem a bonus for some, I’m far too professional to dwell on such a feat of cinematic greatness.

I digress. The gore on display ranges from the laughably inept to the impressively nasty and the fact that there’s just so damn much of it helps to build an impression of a movie that can just manage to become more than a sum of it’s parts. There’s a loud, heavy metal (for the most part) soundtrack, the acting isn’t the best in the world but most people do enough to get by and the twisted stories may be a touch predictable but I couldn’t help enjoying Cradle Of Fear for the entertainingly nasty work it was. In fact, I enjoyed it quite a lot. 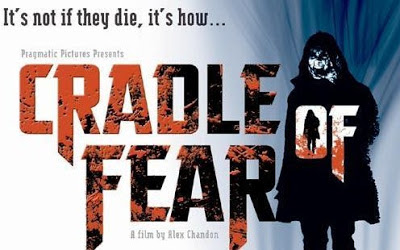