The puns can begin straight away with this one. A complete dog of a movie. We're gonna need a bigger bone. Things get a bit . . . . . . ruff.
-
I’ll try to control myself now, I apologise but this is the kind of movie that leaves you to make up your own fun while the plot plays out predictably and with a serious lack of any excitement.
-
It’s all about a sudden spate of attacks by dogs, hence the title. Something (could it be whatever’s being done in that damn lab?) has turned them into vicious killers. Even the ones that look like cuddly being prodded into action by some offscreen dog wrangler. It’s up to David McCallum to provide the star power and possible solution, George Wyner is the other big brain who believes him when nobody else does and Linda Gray . . . . . . . . . . takes off her glasses and puts them on again in some kind of strange, and strangely alluring, seductive tic.
-
Dogs is just one of those movies, so prevalent in the 70s, about animals that turn into killers but it could have been a very good one. Instead, it wastes it’s premise by failing to cover up the budgetary shortcomings, throwing in one too many scenes clearly meant to instil terror that clearly instil mild amusement instead and not throwing in lots and lots of gore to compensate for whatever else it’s missing.
-
McCallum is okay in the lead role but he’s stuck playing the kind of clichéd, dull hero that we’ve seen far too many times in the genre. A maverick, a guy who can stumble onto something major but not get the back-up to find a solution in time to save the lives of the locals around him, he may as well have “rugged, moody, intelligent hero” tattooed on his forehead.
-
As for the dogs themselves, they don’t really get a chance to shine despite having the title of the movie. There are occasional moments of tension and violence but our canine killers spend most of the time looking like they’d much rather be fetching sticks or chasing rubber balls. Many of the dogs look the part, and are much scarier than (for example) the large rabbits in Night Of The Lepus, but just as many look like they couldn’t bite their way out of Paris Hilton’s handbag.

I actually enjoyed this more than The Breed, a killer dog movie released 30 years after this one, but that’s because there was more that was obviously laughable and it didn’t have Michelle Rodriguez in it. Other viewers may be more discerning and decide to avoid the film completely but fans of the genre, and all it can offer, can at least mine SOME entertainment value from this film. But there are many preferable options.
-
4/10. 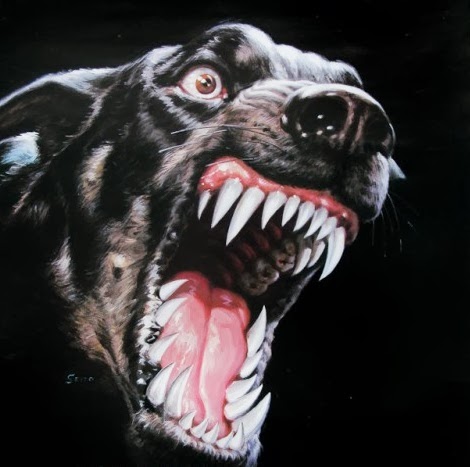