Forget Cannibal Holocaust . . . . . . . . . THIS was the show that surely impressed the Blair Witch boys. Watching Ghostwatch now is a rich, rewarding experience. Quite an eye-opener considering what followed in the faux-reality horrors of the next ten years or so (and on, of course, but the 90s and turn of the 21st century arguably saw the biggest impact made by this particular sub-genre). But to review Ghostwatch I really have to go back to it’s initial airing on the BBC on Halloween night, 1992.

I was 16 (turning 17 in a couple of months) so you’d think that I would be beyond being really scared by anything on TV at that point. But nothing had been on TV that had quite the impact of Ghostwatch. On that particular Halloween night I was babysitting. On my own. The child was asleep so that was that, it was just me and the TV in the corner. Ghostwatch was due to start and I was intrigued, not expecting too much. Michael Parkinson was hosting, a reliable and trusted face from British television and there were other familiar, comforting TV stalwarts – Craig Charles, Mike Smith and Sarah Greene. Apparently, many people in the UK had read in advance about Ghostwatch and knew that it wasn’t real. I hadn’t. Apparently, many people didn’t switch the thing off as soon as it appeared to end and so could read the end credits. I didn’t. This means that the 90 minutes I spent watching Ghostwatch, on my own at the age of 16, were the most terrifying 90 minutes I have ever experienced in the company of the British Broadcasting Corporation.

A recent viewing of Ghostwatch (almost 20 years after it’s original airing) actually left me feeling pleased that it stood up quite well and I felt I had every right to be terrified all those years ago.
The basic premise is a one-off “ghostwatch”, obviously enough, by the BBC. Michael Parkinson is sitting in a studio with a Dr. Lin Pascoe (Gillian Bevan), the phone lines are open and information is being passed along via Mike Smith while Craig Charles and Sarah Greene hope to capture the action on location. That location is a house in a standard English street that has been the scene of much paranormal activity, most of it centred around two young girls (Suzanne and Kim Early, played by Michelle Wesson and Cherise Wesson). The girls are pretty traumatised while the mother (Pamela Early, played by Brid Brennan) is worn out. Will the cameras actually catch anything on film while details are revealed about the history of the ghost, named “Pipes” by the mother who initially tried to appease her daughters by telling them that the strange noises they had been hearing were caused by the pipes.

What’s so effective about Ghostwatch is just how realistic and believable it is during the first hour. The stories being aired, the banter between presenters, the sleek BBC presentation of everything – it all feels just as a programme of this kind would/should feel.

Not all of the actors are up to the task of carrying the thing off (though I never noticed back when I thought it was all real anyway and was too busy trying not to soil my underwear) but most of them do a good enough job and a few do very well indeed. In fact, Sarah Greene deserves particular credit for portraying a version of herself that remains quite believable even as things get decidedly spooky.

The direction by Lesley Manning, and script by Stephen Volk, keeps everything finely balanced. The first hour is a slow burn in many ways but still has one or two big frights in there. What it does so expertly, however, is to throw in tiny details that mess with your perceived view of events and to foreshadow stuff that you forget has been foreshadowed even as it’s scaring the bejesus out of you, in a final 20-30 minutes that still raises goosebumps on my arms to this day.

Based largely on “The Enfield Poltergeist”, Ghostwatch retains an authenticity about it that fans of real-life paranormal studies should appreciate. It also remains an intelligent and thrilling experience and deserves to be seen by all horror fans, if only to see how the BBC aired such a curious Halloween treat that became Britain’s answer to that old Orson Welles “War Of The Worlds” interpretation.

Ghostwatch can be bought here. 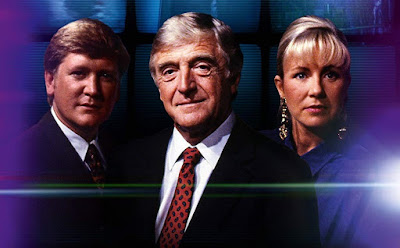