Grave Encounters is a found footage movie written and directed by The Vicious Brothers (AKA Colin Minihan and Stuart Ortiz) that was released last year to a pretty warm reception from horror fans. Of course, some people hated it (many are sick, by now, of the whole "found footage" subgenre anyway) but a lot of people were very impressed. I really enjoyed it but it was almost the very definition of a ghost train/funhouse movie. The jump scares were enjoyable, things were occasionally intense, but it didn't really live up to the promise that it had. In my view, anyway.

That didn't stop me from looking forward to this sequel. I was even more optimistic when I found out that the people involved, and John Poliquin is credited as the director this time, were going to be taking an interesting approach. They were going down the Book Of Shadows route which sounded just fine to me as I am one of the 5% of the population who loved that sequel to The Blair Witch Project.

Richard Harmon (a young man who looks far too much like Robert Pattinson for his own good, sadly) plays Alex Wright, a young man who uploads movie reviews on to the internet and also keeps people up to date on his own blossoming directorial career. He's directing a horror movie with some fellow students involved and he wants it to be something truly memorable. Hopefully, he can make it as memorable as Grave Encounters, a movie that he advised people wasn't really worth a watch but that has played on his mind ever since he saw it. In fact, Alex has become a bit obsessed and thinks that the events depicted in Grave Encounters really happened. When his online videos start receiving replies from a user going by the name of "deathawaits" he decides that he should follow his gut and find out more about the movie. He talks to a number of people and soon becomes more and more convinced that his theory - that the movie shows real events - is correct. But the final proof required will only be found by going to the location and checking it out. The five members making up the group have packed plenty that they think will see them a lot better prepared than the first group.

Surprising as it may seem, I enjoyed this even more than the first movie. The script by The Vicious Brothers is very clever and allows them to have their cake and eat it. When Book Of Shadows was released years ago anyone who liked the film, such as myself, would defend it by reminding people that simply providing another bunch of people getting lost in the woods would be a boring and horrible retread of the first film. In Grave Encounters 2, aspects of the first movie are looked at and the premise gradually moves to what viewers think will simply be a retread of the first movie before it all gets wilder and wilder. That's the real beauty of it. Grave Encounters set things up for a horror movie that had some crazy moments here and there but the sequel basically kicks into gear after half an hour or so and then says "well, if you thought THAT stuff was out there then just strap yourself in and enjoy this lot".

The cast aren't really great but they do good enough. Harmon carries most of the scenes but Stephanie Bennett, Leanne Lapp, Dylan Playfair and Howie Lai make up the full group bravely venturing where things do more than just go bump in the night. Fans of the first movie will be pleased to know that Sean Rogerson returns (though I won't say in what capacity) and has a lot of fun in his role as he gets to act quite differently from how he was in the first movie.

The first movie was enjoyable but slightly disappointing. This sequel has a better script, the courage of its convictions to completely run with the ideas put forward and ends up being slightly better. That's rare in the land of sequels. It's almost impossible in the land of horror sequels. 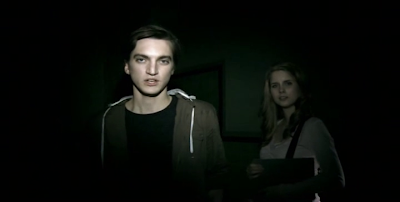