For people who may have forgotten just how good that Tim Burton used to be, for those who have seen nothing from him apart from remakes, Beetlejuice is one of his many, earlier works that will remind you of his imagination, humour and sheer brilliance.

It's the tale of a married couple (played by Alec Baldwin and Geena Davis) who have their happy life unexpectedly spoiled by premature death. Completely bewildered by their situation, the couple find their situation getting worse and worse as their home is then bought and inhabited by a horrible couple (Catherine O'Hara and Jeffrey Jones) and their morbid daughter (Winona Ryder). As they watch their home become "infested" with unpleasant people they turn, in desperation, to Beetlejuice (Michael Keaton), a bio-exorcist who claims that he can solve their problem.

Everything here ticks the boxes for a Tim Burton movie - the use of Danny Elfman for a lively score, the macabre subject matter with plenty of humour in there, the wonderful visuals and main roles for some of his favourite people of the 1980s (Keaton, of course, was his choice for Bruce Wayne/Batman and Ryder was also given a starring role in Edward Scissorhands).

The script by Michael McDowell and Warren Skaaren is enjoyable enough but this is a movie elevated to greatness by a number of flawless performances. Particular praise must go to Michael Keaton, who gives yet another hugely entertaining turn in the title role despite the character not being onscreen for for little more than about 15 minutes. Davis and Baldwin are very likeable as the recently deceased couple trying to protect their home while O'Hara, Jones and Glenn Shadix are very UNlikeable as the new people trampling over many happy memories. Shadix, in particular, is irritating and completely pretentious as Otho, someone who pretends to know everything about everything worth knowing. Winona Ryder is very good as the young girl who happens to figure out exactly what's going on before the rest of her horrid family.

There are great depictions of the afterlife, an unforgettable staging of Day-O (and one or two other songs from Harry Belafonte) and a mixed bag of practical special effects that may not hold up as perfect creations but certainly retain plenty of charm. Beetlejuice is a movie that I have always remembered with fondness but haven't seen that often since that first viewing back in the '80s. It's a pleasant surprise to find that it's one of those movies that just gets better and better with each viewing. 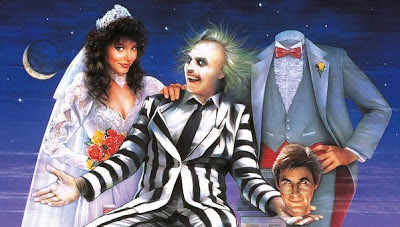