The first of the swashbuckling collaborations between director Richard Lester and writer George Macdonald Fraser (and, of course, Alexandre Dumas), The Three Musketeers is an enjoyable romp that takes a cast of great stars and puts them into something that never quite hits the heights that it should.

Michael York is the young D'Artagnan, a swordsman who heads to Paris to fulfill his potential and make a good name for himself. Unfortunately, upon his arrival he seems to upset everyone he meets. He unwittingly ends up arranging to duel with Athos (Oliver Reed), Aramis (Richard Chamberlain) and Porthos (Frank Finlay) but then becomes friends with them when they all have to defend themselves against a bunch of Cardinal Richelieu's guards. And so begins the advenutres of D'Artagnan and The Three Musketeers, adventures that will involve a beautiful woman named Constance (Raquel Welch), the ruthless Rochefort (Christopher Lee), the Cardinal (Charlton Heston) and the beautiful and scheming Milady (Faye Dunaway).

Made at the same time as the direct sequel, The Four Musketeers (much to the chagrin of the actors involved, who sued for money owed to them as they thought they'd just worked to make the one movie . . . . . . . though there seems to have been no bad blood as they would also get together again for The Return Of The Musketeers), this is the slightly better film but there's not that much in it. As I mentioned in my review of the sequel they all blend into one big, mildly amusing, swashbuckler.

The leads all have their obvious charms but the real pleasure here comes from a supporting cast that includes the likes of Roy Kinnear, Spike Milligan and Rodney Bewes mixing with Simon Ward, Joss Ackland and Sybil Danning. Talk about an eclectic mix.

While it's hard to get too excited about, there's still certainly some easy pleasure in watching, for example, Oliver Reed have a bit of a drink and still swagger around, ready to lunge at anyone who engages him in swordplay. The film, and the sequels too, allows viewers to look at stars through rose-tinted glasses and to see them in roles that really play to their strengths. Michael York was always the handsome up and coming star, Richard Chamberlain was always relaxed and assured and Frank Finlay was always very entertaining. At least, that's how they have remained in my mind and that is how they are made to appear in this adventure.

Richard Lester may not have been the best director of this kind of material but he sure knew how to throw some big names together and let them have some fun. That fun is infectious, even if the actual movie never moves into top gear. 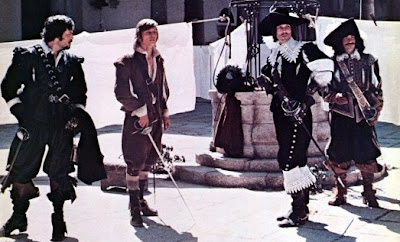