Modern horrors come in all shapes and sizes, but many people keep trying to insist that they're all unscary and not worth your time. There are many, many fine horror movies still being made and released each year, it's just that the better movies aren't always as easy to hear about and get hold of. Most people will know this already, I'm not saying anything new, but it's always worth remembering every now and again. Especially when you come across a movie like Dead Birds (recommended to me many years ago by the fine folks who used to populate the IMDb Horror board).

Henry Thomas, Patrick Fugit, Michael Shannon, Isaiah Washington, Nicki Aycox and Mark Boone Junior star as a bunch of outlaws who rob a bank in 1860s America. They then hide out at an abandoned plantation before their next stage of the plan - getting to Mexico and splitting the gold. But it's not long until mistrust starts to take hold, as well as a sense of unease about just where they're holed up for the night.

With great acting from all involved, Dead Birds is a horror movie that feels a bit different while hitting a number of familiar genre beats. Henry Thomas is a decent lead, but the real treats come from the supporting cast (especially Michael Shannon before his name was so well known and Isaiah Washington). Nicki Aycox could easily, in a lesser film, be sidelined as nothing more than a token female character in the group, but she's given some decent moments and she does well with them.

The script by Simon Barrett does a great job of making each bit of character motivation clear and also allowing for some flashbacks that provide imagery to feed into the fear-filled present. The main characters may not realise how the fear is building until the second half of the movie, but it is. All around them.

Director Alex Turner also deserves praise for his handling of the material. There are a few jump scares here and there, with some decent CGI helping one or two of them, but he also keeps ladling on the atmosphere like golden honey. The film may blend Western elements with the horror, but it's not trying to be a horror Western, specifically. Oh no, it's just a horror movie that happens to take place in years gone by when there was a shorter life expectancy and bigger divisions amongst men (namely race and allegiance to certain flags). It's a real shame that Turner doesn't have much more to his credit yet.

Do check it out when you get the chance and I don't think you'll be disappointed.

Dead Birds is showing today at The Filmhouse - buy your ticket here - as part of the 20th anniversary celebrations on the run up to Dead By Dawn. 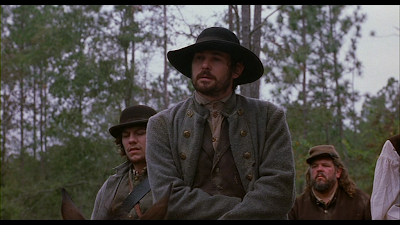