I don't know what the general consensus is on this Hammer horror movie but, for me, it's one of the worst of the lot featuring our favourite fanged count. Even if it is also amusingly groovy.

After Dracula (Christopher Lee) is yet again laid to rest by the brave Van Helsing we move forward to the Britain of the seventies where one of the Count's followers (Christopher Neame as Johnny Alucard) is doing his best to bring the master back to life, allowing him to exact his revenge on the descendants of Van Helsing (Peter Cushing is on board for this instalment and also has a granddaughter played by Stephanie Beacham).

Directed by Alan Gibson and written by Don Houghton, this vampire movie suffers from a number of distracting flaws. First of all, the updating of the ongoing battle between Dracula and Van Helsing to the 1970s makes the movie, ironically, appear much more dated than any other movie in Hammer's Dracula series. Then we have the terrible acting. Cushing and Lee are as good as ever but the support from the "hip youngsters" is cringeworthy. Beacham doesn't do well but even her poor performance is better than most of the others on screen, with the exception of the gorgeous and magnetic Caroline Munro - who is gorgeous and magnetic and I won't hear any different.
Everything is flat and unexciting, from the painful script that strives to be down with the kids to the execution of the few set-pieces, and we get a distinct lack of any pleasing bloodletting or lusty behaviour to compensate for the many dull moments.

Is there any way it could be made any worse? Maybe a gratuitous scene featuring a couple of ear-hurting musical numbers from "Stoneground" - who also get namecheked as if they were appearing on some Saturday kid's TV show - with one or two of the band members doing their best to stare at the camera whenever they get the chance (see the top pic as an example). It's a testament to their presence that Lee and Cushing manage to raise this movie to the tier of average. Without them, it would definitely rank even lower. 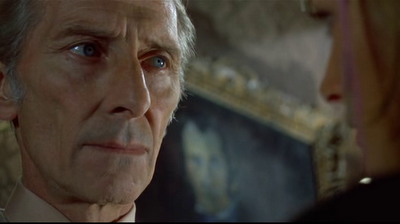