Based on a popular series of comedic novels, School For Scoundrels is a constant pleasure from start to finish, mixing the best of British with a familiar tale of one poor zero trying to turn himself into a bit of a hero.

Ian Carmichael is Henry Palfrey, the poor schmuck who finds himself in the doldrums when he realises just how much of a schmuck he actually is. He's a polite, nice guy. Which leads to him being patronised by hiw workforce (mainly one man, played by Edward Chapman), having the wool pulled over his eyes by some dodgy car salesmen (Dennis Price and Peter Jones), and, most importantly, being overshadowed in a competition for the woman he loves (Janette Scott) by a charismatic bounder (Terry-Thomas). Hoping to make himself a better man, Henry enrols at The School Of Lifemanship, an institution run by Dr. Potter (Alastair Sim) to teach people all of the tricks required to maintain a position of superiority in any social situation. It might just help him become a winner, but maybe not in the way that he had always envisioned.

Considering the quality of the final product, it seems redundant to comment on how troubled the production was behind the scenes. So I won't. I'll just say that Robert Hamer is credited as director, with Patricia Moyes and Hal E. Chester being the named writers. And, taken at face value (judging by the final result - which is really all there is to do in many instances), they all did their bit to create a minor classic of comedy.

But let's not underestimate the value of the perfect cast. Whether being walked all over or asserting his dominance, Carmichael is, essentially, a very likable lead. This makes his mistreatment all the more affecting, and his attempts to achieve success all the more enjoyable. A good hero, however, needs a good villain, and that spot is taken by the irreplacable Terry-Thomas. Few people, if anybody, could play a charming rogue like Thomas, and he's in his element here. As is Alastair Sim, who fades into the background for most of the main scenes, yet remains memorable thanks to the strong impression he manages to make in the first 10-15 minutes. Scott is suitably lovely as the woman who drives our hero to such extreme "self-improvement", and every other player fits perfectly in their respective roles, with John Le Mesurier also deserving a mention for his wonderfully disdainful head waiter.

Timeless, charming, often outright hilarious, cutting, and smart. School For Scoundrels is essential viewing if you're a fan of any of the cast members, a fan of British cinema, or just a fan of great comedy. You could even call it educational. 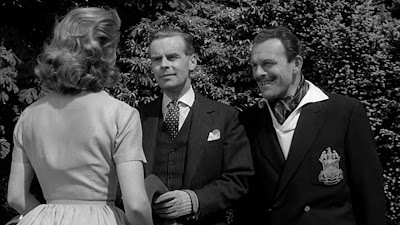 School For Scoundrels was digitally restored for the Studio Canal DVD (August 31st) and Blu-Ray (October 5th) release here in the UK. Extra features include interviews with Peter Bradshaw and Chris Potter (about the film and the source material), and an interview with Graham McCann (about Terry-Thomas). There's also a stills gallery and a trailer.