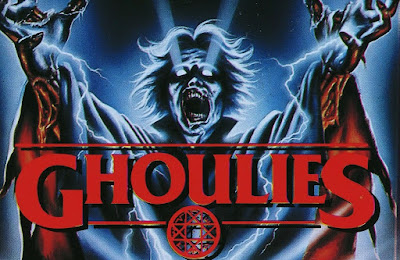 Movies are made for all kinds of reasons. To tell a fantastic story. To teach a lesson. To make money from fans of established properties. Or to get as much as possible from the latest trends. Empire Pictures, the main production company behind Ghoulies, would often work with that last motivating factor. Ghoulies was a dark comedy horror that began development before the release of Gremlins, but the timing of it made it seem designed to cash in on the success of Gremlins. In fact, after the release of the latter movie, we ended up with a whole host of mini-creature features. The Critters series - another apparently started before Gizmo and co. ruled the box office - remains one of the most consistently solid b-movie quartets I can think of (with only Tremors coming close to it), but it was a rare cash-in that managed to avoid feeling lazy and cheap. The standard of the other movies to come out in the subsequent years would be more in line with Munchies and Hobgoblins.

Ghoulies (1984) looked as if it had some potential. Although initially a bit of a head-scratcher, it was easier to enjoy when you realised that the comedic elements were intentional. The creature design wasn't too bad, the special effects weren't appalling, and it had the benefit of a cast that included both a pre-fame Mariska Hargitay and Scott Thomson (Copeland from the Police Academy series). And the video cover had a slimy monster popping out of a toilet. I was 9 or 10 when I first saw that cover and I knew that I had to see the movie. Bear in mind that I MAY have seen this movie before Gremlins. My memory is hazy, but I recall filling up my Gremlins Panini sticker album for a long, long time before getting to see the movie itself. This review here will sound like me repeating myself if you just read this paragraph.


Ghoulies 2 (1988) went one better. The monsters were coming out of the toilet again, but this time a couple of taglines played up the mix of comedy and horror.
One read: "Just when you thought it was safe to go back in the bathroom"
The other: "They'll get yours in the end."
The creature design was even better this time around, the laughs were more obvious, and the carnival setting helped a lot (more horror movies should make use of the carnival atmosphere). It also had the enjoyable Phil Fondacaro in a fairly substantial role, and J. Downing as the kind of uptight, heartless businessman/human villain viewers just love to see get their comeuppance. Ghoulies 2 wasn't just good. It was, that rare thing indeed, superior to the first film. 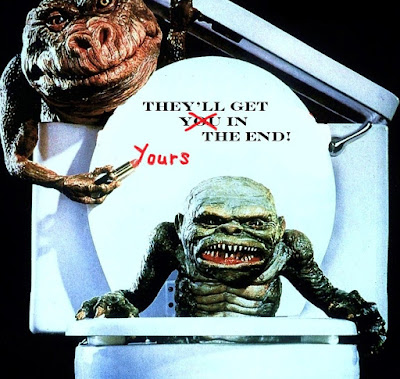 But, just when you thought the series might end up as a pleasant surprise, along came Ghoulies Go To College (1991). AKA Ghoulies III. I guess that someone somewhere assumed that if the sassy creatures had drawn such a great response from viewers while in a carnival setting then it would be a win-win situation to place them in the middle of a . . . . . . . . . . . . . frathouse comedy. Oh yes, that happened. And Kevin McCarthy was roped in to play Professor Ragnar. And did I mention that the creatures now talk? Which allows every scene to practically overflow with "witty wisecracks". The end result isn't good, although it's a relief to see the makers of the movie actually remember that it should have some decent monster action by the time we get to the grand finale. Film fans may find it worth a watch now to see Kane Hodder in a very brief role, playing a sap who ends up stuck in a mop bucket, and Jason Scott Lee giving no sign whatsoever of the talent that he would be able to display in the next few years. At least there's also a fleeting amount of gratuitous nudity to ease the pain. 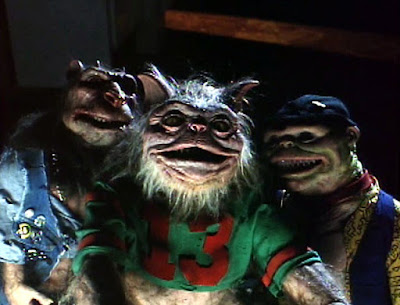 Last, and very much least, we were given Ghoulies IV (1994). And when I say that we were given it I mean given in the same way that people are given a punch in the face, or radiation poisoning, or even syphilis. Directed by Jim Wynorski, a man who has given me delights as varied as Chopping Mall and Cleavagefield, this movie insults the audience with the most tenuous of links to the first film (okay, the male lead kinda reprises his role), a rambling and shoddy plot that it's hard to remotely care about, and a couple of creatures that AREN'T EVEN REAL FUCKING GHOULIES! Sorry, but when you stick with something over the years you can be irritated greatly by small details like that. It was the coffin nail in a series that had taken a more unusual journey than most. Think about it, we never even got to see a Ghoulies In Space outing (the usual check-point for horror franchises).

I hope I'm not alone in my fondness for the first two movies, but I'd be very interested to find someone who enjoyed the later instalments. If only to make sure they can receive the right medication. 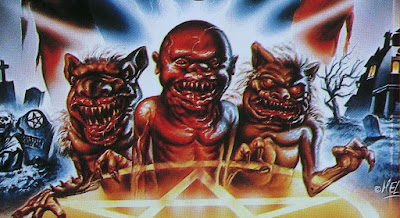