Written by Kumail Nanjiani and Emily V. Gordon (husband and wife), The Big Sick is a romantic comedy loosely based on how . . . Kumail Nanjiani met and fell in love with Emily V. Gordon. What could have seemed smug and self-indulgent ends up being something fully deserving of all the accolades it has received over the past few months. On the poster and Blu-ray cover you can see phrases like "easily one of the best rom-coms of the decade", "romantic and hilarious", and "sparkling and heartfelt", as well as a few five-star ratings to help sell it. And all of those statements and ratings, originating from sources as varied as the likes of Variety and Glamour, are absolutely correct.

Very much in line with the other films that have been helped into creation by producer Judd Apatow, this is a mix of comedy and drama that gives characters room to breath in a two-hour runtime. Unlike some of the other Apatow movies I could mention, however, this doesn't ever feel as if it is overstaying its welcome.

That is down to the main performances, and the fact that Nanjiani and Gordon have such a great story to spin into cinema gold. Director Michael Showalter doesn't concern himself too much with adding any bells or whistles, happy to rely on the characters and the dialogue, which is a smart decision on his part.

Although Nanjiani happily plays himself onscreen, his wife is portrayed by Zoe Kazan. Kazan is fine, although she spends a large portion of the movie offscreen, or visible on a hospital bed (hence the title, the plot is basically Kumail and Emily having a big fight and then Emily ending up hospitalised and placed in a medically induced coma, which can make it a bit awkward to kiss and make up). Holly Hunter and Ray Romano play Emily's worried parents, and they are both excellent, which is something I never thought I would say about Romano, considering I assumed Everybody Loves Raymond was a deliberately ironic sitcom about one of the most annoying men on the planet. Anupam Kher and Zenobia Shroff are both very good, playing Kumail's parents, and Adeel Akhtar is Kumail's brother, Naveed. Other comics are represented by Bo Burnham, Aidy Bryant, and Kurt Braunohler, and there's nobody in the supporting cast who drops the ball, including many not mentioned here.

There aren't any major set-pieces here, and few of the laughs aren't BIG laughs, but the laughs are surprisingly consistent, entwined nicely with the drama and the heart of the whole thing. This is from the script and the presentation of the material, but it would be remiss to undervalue just how much of the film succeeds thanks to the sheer likeability of Nanjiani. He has been putting in fun performances for a good few years now, often in material that isn't really deserving of his presence, and I hope we can now see him in some more lead roles. 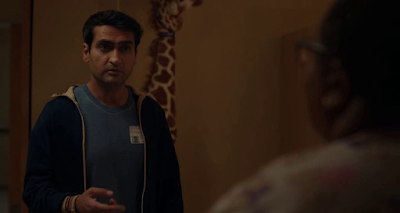