There are many pros and cons to the immediacy and availability that Netflix gives to viewers. Many now prefer having some big titles that can be watched from the comfort of their own home (and I am one of them), many complain that it is taking us further away from the big screen experience. Many of their original movies, and titles they have acquired, have been interesting and enjoyable, although just as many people now see Netflix as a dumping ground for the dross that studios realise won't make them enough money at the box office. And everyone has an opinion ASAP, which can make it harder to fully form your own thoughts for a review without considering what others have already said.

Many of the reviews I have noticed so far for Mute have not been kind, and I will mention some of the criticisms here because they are, for the most part, fair. Regardless of the problems it has, however, I have to say that I really enjoyed Mute. It's far from perfect, but it's a stylish and enjoyable sci-fi thriller that takes some dark turns I really wasn't expecting.

Alexander Skarsgård plays Leo, a young man who lost his voice in a childhood accident. He works in a bar, avoids most tech due to his Amish upbringing, enjoys crafting wood into little pieces of art, and is in love with a young woman, Naadirah (Seyneb Saleh). When Naadirah suddenly goes missing, Leo sets out to find her, taking himself deeper and deeper into murky and dangerous waters, populated by powerful criminals and lesser crooks, like the two characters portrayed by Paul Rudd and Justin Theroux.

Directed by Duncan Jones, who also co-wrote the movie with Michael Robert Johnson, Mute is a good idea that isn't realised to its full potential. In fact, it's a mish-mash of good ideas that aren't all handled as they should be. The whole idea of Leo being Amish isn't ever used as well as it could be, and in one scene he takes to driving almost as well as Michael Myers did. It's something that could have set this film further apart from others in this subgenre, but not enough is done with it. The same can be said about the world created onscreen, and the fluidity of gender depicted in a number of the characters. Jones has created a fine top coat, there's just nothing underneath to keep it there, leaving it to wear thin and eventually flake away to nothing.

The above paragraph won't be news to anyone who has read any other reviews of Mute. They are common criticisms, and I agree with them. What I don't agree with is the opinion that some of the darker and more disturbing moments are unnecessary. There's a character development in Mute that will make viewers very uncomfortable, and rightly so, and the pay off is huge. If this element hadn't been incorporated into the script, as horrible as it made me feel, then the final act would have had less tension and less impact.

I also disagree with anyone complaining about the acting from the leads. Skarsgård is superb in his role, he's so great at displaying both strength and vulnerability, those wide eyes ready to tear up when he is being hammered with truths he doesn't want to hear. Rudd is equally superb, playing his character with such energy and sardonic humour that you're often not sure whether to enjoy his company or simply loathe him, and Theroux does very well with arguably the easiest of the three roles. Robert Sheehan is impressive in his various incarnations, while Noel Clarke and Robert Kazinsky feel as if they have wandered in off the set of a very different type of film. And then we have Saleh, who is just . . . okay. Viewers have to buy into the central relationship by buying into the portrayal and appeal of Leo, otherwise this wouldn't work, mainly due to the fact that we don't get enough time to know Saleh. She is not the onlt female character given short shrift. The film, as a whole, doesn't give us many female characters at all, and those who do get screentime aren't handed anywhere near the best roles, to say the least.

But here's the thing about the problems with Mute. They don't matter so much while the film is playing. Jones paces things well enough, he incorporates some beeautiful shots (a sequence in a bowling alley is a real standout), and he clearly has faith in his actors to distract you from the weaknesses. Which they do, and that easily makes it worth a couple of hours of your time.

It's on Netflix now so there are no links here for shiny discs. 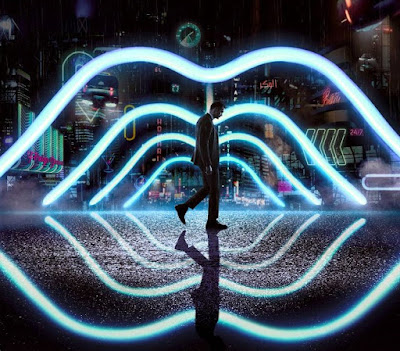