Just because everyone else has mentioned it already doesn't mean that I will refrain from using the same words; Happy Death Day is best described as Scream meets Groundhog Day. If that very brief summation of the plot doesn't appeal to you then you're unlikely to enjoy it. But if your face lights up at those words . . . this will work for you.

Jessica Rothe plays a college student named Theresa, AKA Tree, who wakes up on her birthday, goes about her usual activities, and ends up dying violently at the hands of a murderous madman. She then wakes up again, on her birthday, and starts trying to figure out what is going on, and trying to get through the day without dying. Unfortunately, someone is very very determined to have her dead by the end of the day. And each death leads to a jump back to the start of the day.

Although you could point at Happy Death Day and bemoan the lack of bloodshed and more adult content, that would be nitpicking. This is, after all, a film for teens, and it succeeds brilliantly in that regard.

The script by Scott Lobdell gets everything right. There aren't too many main characters (with most of the action revolving around Tree and the boy she first sees upon waking up every morning, Carter), the main activities throughout the day are obvious pointers of the timeline, and also ready to be changed by the actions of Tree, the deaths are decent enough, and the mystery element - the who and the why - is simple and effective.

Director Christopher Landon shows, once again, that he's a dab hand with the horror genre tropes. This may not be as much fun as his previous outing, Scout's Guide To The Zombie Apocalypse, but it's almost an ideal teen horror (with a little bit of comedy) to please most people wanting something for the weekend.

Rothe and Israel Broussard (playing Carter) make for decent leads, despite my not being overly familiar with either of them. They work well together, and Rothe is in almost every scene (due to the nature of the plot device), and there are also decent enough supporting turns from Ruby Modine, Charles Aitken, Laura Clifton, and everyone else involved. Surprisingly, considering how often it happens in these movies, there aren't any seasoned genre stars in cameo roles, as far as I can recall, but the material is strong enough to make any such concessions or winks unnecessary.

I can understand why some horror fans wouldn't want to give any of their time to this. It's fairly safe and inoffensive stuff, in many ways. But that doesn't mean that it isn't worthwhile. While it may not be all that intense, or any kind of splattery gorefest, it's a surprisingly smart and enjoyable twist on standard slasher fare. 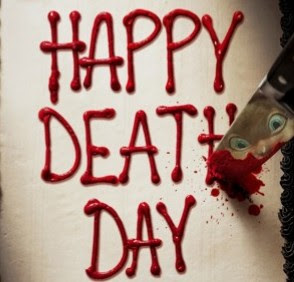