Aubrey Plaza stars as Ingrid Thorburn, a young woman who can't quite adjust to life in the modern age, to put it mildly. She likes to connect through Instagram, and she also likes to turn any small connection into something much bigger in her own mind. Like or comment on one of her photos and Ingrid will think of you as a potential close friend. And that is how she ends up insinuating herself into the lives of Taylor (Elizabeth Olsen) and Ezra (Wyatt Russell). Taylor is a bit of an Instagram celeb, influencing people with photos of her lifestyle and shopping choices, while Ezra is her partner, an artist reluctantly using social media because he knows he must.

Ingrid Goes West is a decent warning to people about the perils of being consumed by the need to portray a perfect image all over social media. It comments on the divide between what is put on display and what is hidden outwith the edges of the phone or computer screen. And it certainly illustrates the extra care needed to help people with mental health issues in an environment where they can be so easily confused and manipulated. Beyond that, it's also a really good drama about damaged people being further damaged by the modern world.

Written by Matt Spicer and David Branson Smith, with Spicer also directing, this is a film that never feels false, despite the obvious exaggeration used here and there (and even that element of exaggeration is debatable when you think of people who strive to make themselves "internet famous"). The main characters are quite easy to dislike but that doesn't make things any easier to watch as nerves start to fray and tensions develop.

Plaza gives one of her best performances yet in the lead role, showing us a troubled young woman who has mastered the art of putting on her best smile for the selfies that she shares with the world. Olsen and Wyatt are both great, the former all fake niceness and ego while the latter is avoiding reality in a slightly different way. O' Shea Jackson Jr is also very good as Dan, a man who gets involved with Ingrid without realising how many lies she is telling to keep her pretend life as perfect as it can be, and Billy Magnussen is enjoyably nasty as Nicky, the one person who seems to immediately see Ingrid for who she really is.

You can watch Ingrid Goes West and enjoy it without having to think too much about the points it is raising about the potential damage of lives lived for online approval and followers. But it also raises some decent points that I hope might result in some good conversations between parents/friends/partners and anyone trying to measure themselves against snapshots of lifestyles that are just that. Snapshots. Not yardsticks, because nothing you see online should ever be used as a yardstick.

UK folks can get it on shiny disc here.
Americans can buy it here. 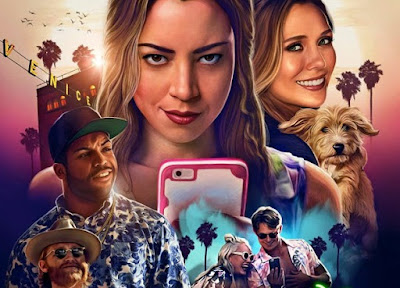