Let me start this review by saying that I enjoyed Daddy's Home. Yes, I know the comedy banter between Will Ferrell and Mark Wahlberg isn't something that many people admit to enjoying (aside from their best work in The Other Guys) but they made me laugh many times in the tale of a sensitive stepfather (Brad, played by Ferrell) being infuriated by the alpha male biological father (Dusty, played by Wahlberg) swanning back into the lives of his children and disrupting their lives.

This sequel finds the extended family living a fairly harmonious life, even if there are still some resentments that hide below the surface. Brad and Dusty take turns with activities, Linda Cardellini (playing Sara, mother to the children, and Brad's partner) seems happy with the situation, and everyone seems settled. Except for the fact that they're not, something that becomes evident when young Megan (Scarlett Estevez) decides to tell people that she hates moving back and forth for Christmas festivities. This leads to one big Christmas being planned, a day with everyone in the same place and the kids not having to move from one family to another. And it's going to be even more special, because Dusty's father (Kurt, played by Mel Gibson) is going to join them. As is Brad's father (Don, played by John Lithgow).

Most of the main players return here, with director Sean Anders also co-writing the script once again (also with John Morris, but no Brian Burns this time around), and it's clear from the early scenes that this is an easy, comfortable, comedy sequel for all involved. You won't find any real depth here, and you won't find anything plausible, but you will get a cast having fun, and a number of amusing moments.

Gibson is there to be an even more toxic male than Wahlberg was in the first film, while Lithgow seems to be, for the most part, even more sensitive than Ferrell's character. This adds plenty of friction, which creates more comedic situations, and then leads to a third act that features both John Cena and plenty of horrible, unearned, attempts at emotional manipulation. All of the male leads get to have lots of fun. Cardellini, on the other hand, is simply left to witness an unfolding sequence of catastrophic events while doing nothing but feel insecure when positioned close to Alessandra Ambrosio (playing Karen, the woman now with Wahlberg's character).

Daddy's Home 2 is a rather weak film, in terms of the art of cinema. It's clumsy, painfully obvious, and suffers even more during the times when it tries to turn Brad into Clark Griswold. It kind of works as a sequel, it fails as a Christmas film (mainly because a lot of the better moments feel as if they have been cribbed from better movies), and it's the worst one yet to pair up Ferrell and Wahlberg.

Oh, I still laughed though. There were quite a few times when I laughed aloud. Hard. For all of its failings, and there are oh so many, it still manages to get the comedy right on many occasions. And that's a good thing for a comedy film. Which is why I still rate this as above average. Fans of Ferrell will find enough to enjoy here. Everyone else should avoid this like a spiked bowl of eggnog.

Daddy's Home 2 can be bought here.
Americanos can buy it here. 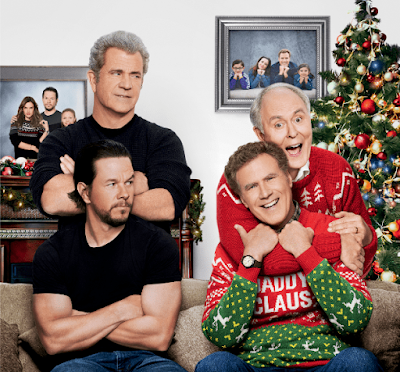