Directed by, co-written by, and starring Jessica Cameron, Truth Or Dare is a film so desperate to shock that it becomes dull well before the halfway point. Highly derivative, there were already other Truth Or Dare movies (directed by Tim Ritter, and Cameron had even starred in one of his movies before stepping up to make this) and fans of extreme Japanese cinema will be familiar with the Red Room movies, films that this also owes quite a debt to, it's a great shame that those involved didn't put their energies into something less obvious and cynical.

The plot revolves around a group of online celebs who call themselves the Truth Or Daredevilers. They get fans and online hits from extreme stunts, upsetting one individual when their most recent antics involve a death (minor spoiler ahead)... that turns out to be fake.

Will some horror fans find enough here to enjoy? Yes. Some will revel in the fake gore, able to overlook the weak script and ridiculousness of it all (one character seems barely pained by the finale, one lives way beyond their expected time of death), and Cameron and co-writer Jonathan Scott Higgins were obviously too busy squeezing in hot button skeletons in the closet to bother about anything else. You get infidelity, pedophilia, incest, transgenderism, and some nastiness with a bottle that comes closest to those Red Room exploits (anyone who has seen those will remember the lightbulb scene).  Obviously desperate to be edgy and offensive, and I am sure some viewers will be offended, the script just comes across as puerile and tiresome.

The acting is, sadly, not good enough to help the script. Cameron, Heather Dorff, and Devanny Pinn all cry and swear a lot, as do Brandon van Vliet and Shelby Stehlin (the main ones I remember). They may look upset but it's never anywhere near the hysteria and terror that you could imagine people experiencing in this situation. Ryan Kiser isn't even that good as the crazed "game master" but he gets one moment at the very end of the film that shows he could have done a bit better with more interesting material.

So how does Cameron, who has a fanbase among horror fans, do with the direction? Not good. All of the flaws feel like they lie at her feet, as a result of not being able to make the best use of the low budget, not giving up her "star" role to anyone else, and generally putting together something that feels cheap, lazy, and rushed.

I guess fans are happy to support Cameron, regardless of the quality of her work. I am not a fan, from what I have seen so far. And am therefore happy to advise people to avoid this one.

I dare you to buy it here. 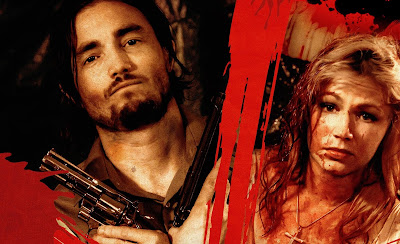