Let me get the basics out of the way first. The Devil's Doorway is a sorta-found footage movie (that's the context, but there's a bit of editing on display and very occasional score, unless my ears deceive me). It's about two priests, the elder Father Thomas (Lalor Roddy) and the young Father John (Ciaran Flynn), who visit a Magdalene Laundry to verify a possible miracle; a statue that has been known to weep blood. Father John records as much as possible, Father Thomas spends a lot of time doubting what he sees happen around him, and both men soon find that there are terrible secrets to be unearthed in this nun-staffed institute for "fallen women".

The fact that this is the feature debut of director Aislinn Clarke (who also co-wrote the script with Martin Brennan and Michael B. Jackson) is very impressive. There may be a lack of subtlety throughout, some will be put off by the number of jump scares and you could roll your eyes at a some of the details (the obviousness of naming a doubtful priest Thomas being one of them), but that's offset by an impressive atmosphere of dread and imagery that constantly unnerves viewers by interspersing all of the bigger scare moments with little touches of sheer creepiness. My first viewing was punctuated by moments of me jumping out of my skin and turning away from the screen, sometimes only processing what had just happened as I watched the aftermath while my heartrate started to return to normal. I may have also loosed a few profanities, on occasion.

Roddy is absolutely fantastic in his role, helping to take the film up a notch with his believable performance, and Flynn works well alongside him. There are also good performances from Helena Bereen as the Mother Superior and Lauren Coe as a young, afflicted, woman named Kathleen. The former is the typical indomitable figure in this kind of environment, the latter turns up as the film becomes more intense than it already was.

You can take this film exactly as it is and be very entertained and scared. It's brilliantly constructed and the building momentum allows for less time to spend questioning the way everything plays out. But the unexpectedly great thing about The Devil's Doorway is that, underpinning everything, is a damming commentary on a legacy of troubling behaviour AND issues that still affect many women in Ireland to this day (the film premiered on the same day in 2018 as the Irish referendum on its abortion laws), and it does so without taking anything away from the horror. In fact, you could easily say that as you become aware of that strong subtext (some may call it just text, some may not give it a thought while being terrified) it all starts to add to the horror, especially as you think back to the time period of the film and how many women lived through at least some of what is shown onscreen. I would argue that the subject matter transforms some of the more clichéd images into more affecting and haunting elements.

Although it has some flaws, to be expected in most debut features, this is a fierce and powerful horror film that has enough intelligence to compensate for the negatives. I can easily see it becoming a bit of a favourite for horror fans, and it's definitely a new contender to sit near the top of any "best found footage movies" list.

Well done to Clarke on her achievement. I cannot wait to see what she chooses to do next.

The Devil's Doorway is currently available to rent or buy in digital form here.
Americans can also stream, or buy themselves a nice shiny disc here. 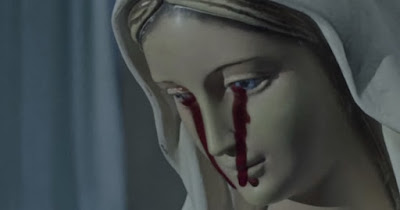