When Spies Like Us first came out I remember that I rented it numerous times, running home with that chunky VHS box in my pre-teen hands and looking forward each time to the antics of Dan Aykroyd and Chevy Chase sparking off each other onscreen. And then I was always disappointed by the slow build-up and the flat patches in between the decent moments of comedy, even at that early age.

So it's no surprise to learn that the film turns out to be just the same nowadays as it seemed way back then. The story is a simple one. Chevy Chase and Dan Aykroyd are two government employees who think that they're being given a chance to be spies when, in actual fact, they're nothing more than decoys while the valued spies get on with their duties. This leads to numerous situations in which our inept leads find themselves way out of their depth and with their lives on the line.

Based on a screenplay by Dan Aykroyd, Lowell Ganz and Babaloo Mandel, Spies Like Us is clearly inspired by the Bing Crosby/Bob Hope "Road" movies and works well as a tribute. Chevy Chase is the fast-talking, bumbling half of the duo while Aykroyd is actually pretty smart and simply unequipped for a mission which the two men have not been expected to complete in any event.

Director John Landis paces things almost exactly as he paced Trading Places, except this time around there are less big laughs in the comedic moments and so the movie feels slower and "flabbier" despite a runtime of just over 100 minutes. Highlights include a selection of scenes showing our duo going through intense training, a sequence in which the two try to pass themselves off as doctors and a finale that features the funktastic sound of "Soul Finger".

Chevy Chase and Dan Aykroyd play to their strengths, you'll know already if you love or hate them, and the rest of the cast includes such luminaries as Steve Forrest, Donna Dixon, Bruce Davison, Bernie Casey, Frank Oz and, as this is a Landis movie, a number of cameos from the likes of Terry Gilliam, Ray Harryhausen, Joel Coen, Sam Raimi and many others.

Oh, and to end on a little bit of trivia, the "see you next Wednesday" that was a Landis trademark in many of his movies is seen on an army-related poster in the office of Colonel Rhumbus (played by Casey).
6/10. 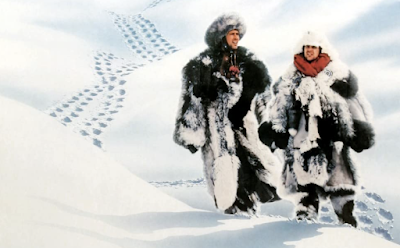