Troma. A company not renowned for their subtlety or positive impact on the medium of cinema. But, what the hell, they ARE a fantastic independent company and they keep churning out wild and wonderful movies with refreshingly un-pc content year after year. But there are two movies, in my opinion, that stand head and shoulders above the others. Movies that remain quintessential TROMA movies. They have a mix of groan-inducing humour, crazy splatter gags and merchandise potential. One of those movies is the fantastic Class Of Nuke 'Em High. The other is The Toxic Avenger. It's not really a great movie if you judge these things along the same standards as, say, Casablanca or Schindler's List. But it's a great TROMA movie, which means that normal criteria is thrown by the wayside and we're looking at a niche product for fans.

Young Melvin Junko (Mark Torgl) is an irritating sap who works at a health centre. He spends his time cleaning up and annoying the bullies who hang around there (when they're not driving over innocent children) by simply being nearby and continuing to breathe. So the bullies play a prank on Melvin and, in the great tradition of horror movies, it goes horribly wrong. After an accident with a load of dangerous chemicals, Melvin is transformed into a mutated beast. The Toxic Avenger (played by Mitch Cohen). Toxie sets out to clean up the streets but finds his rage getting more and more out of control, even as he finally finds something that may resemble true happiness with cute blind girl, Sara (Andree Maranda).

The Toxic Avenger has everything you could want from a Troma movie. There's the underlying theme of environmentalism (also present in Class Of Nuke 'Em High, a movie that looked at the dangers of nuclear power), a bunch of annoying punks that you want to see get their just desserts, special effects ranging from the awful to the superb and deliriously over the top violence (the robbery of a fast food restaurant being one highlight).

Directed by Michael Herz and Lloyd Kaufman, who also helped write the script with about three other people, this film rises above the bad acting and low budget thanks to the fast pace and ability to throw so much onto the screen that something entertaining is always happening. Robert Prichard and Gary Schneider are fun as Slug and Bozo, respectively, while Jennifer Babtist and Cindy Manion are cute enough bad girls. And Pat Ryan has fun as the mayor.

If you haven't seen a Troma movie before then this may not be the one to start with but fans will enjoy it and newcomers can always find out where they stand.
7/10. 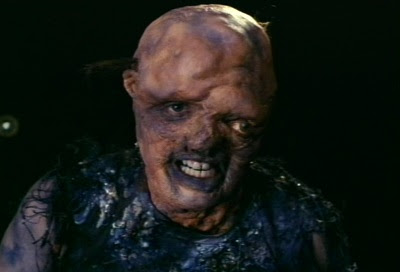