If you decide to watch The Toxic Avenger Part II without having seen the first movie then I'd have to question your sanity. Which is my way of saying that, no matter what I put forward in this review, you should already know what you're letting yourself in for.

The New Jersey hero, created after a prank went wrong and he fell into a barrel of toxic chemicals, returns for a mix of groansome humour, over the top violence and more Troma trauma. Tromaville has become quite a peaceful place but it's only a temporary lull. When Apocalypse Inc. come along they want to mess up everything, physically hurt people and run the whole town. They start their attack by bombing a home for blind people but soon realise that ol' Toxie will be too big a problem to deal with so they come up with a devious plan that gets our mutated hero travelling to Japan to find his father. Which means, as you may have guessed, some martial arts moves, naked Japanese women and plenty of fish. The people of Tromaville are left to be terrorised while clinging on to the thin hope that Toxie gets back in time to save them all.

I really liked The Toxic Avenger, despite it's many flaws, and it remains one of the better Troma movies available. In my opinion. But, as is the case with almost any Troma movie, it's an acquired taste. This sequel is even worse in a number of ways but if you liked the first film then you're not likely to hate this one.

The effects are as variable as they were in the first movie, with a couple of great gore moments in the opening 10-15 minutes offset by some terrible comedy dance moves, and the acting is consistently . . . . . . . . . . in line with the rigorous Troma standards (to put it politely). Toxie is played by two different people (John Altamura was fired at some point but his footage was retained, Ron Fazio took over and provided the voice throughout as well as any new acting required), Phoebe Legere is Claire, the blind girlfriend of Toxie (who I can only assume is supposed to be the same one named Sara in the first film but we're not supposed to worry about that) and a number of other people play . . . . . . a number of other people. I did like Lisa Gaye as Malfaire but acting isn't something valued too highly here. Nor is continuity. Or anything that gets in the way of the crazy antics. Like some semblance of believable reality.

Michael Herz and Lloyd Kaufman are once again the directors, with the latter also involved in the team that put the story and then script together, so they can shoulder most of the blame. They're used to doing that by now and they don't care. This is not a movie to watch if you fancy some classic piece of cinema, but it will do the job if accompanied by beer, pizza and a taste for something dumb and fun. Just.
5/10.

P.S. The link below may not be the best version available. I tend to just pick the most readily/cheapest versions on offer for anyone interested but it's especially important to shop around, especially with Troma titles. 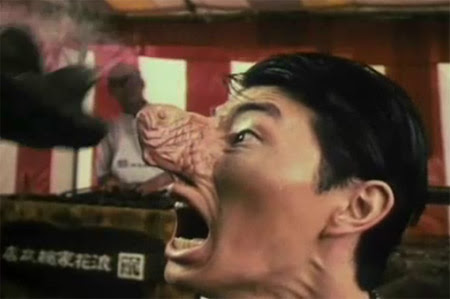