Well, if you're expecting anything in the fourth Deathstalker movie that hasn't been in any of the previous three movies you've clearly never viewed any low-budget b-movie franchise before. But if you're expecting more of the same then you're in the right place. The second film in the series remains the best but this one easily sits alongside the original with a mix of fights, magic and gratuitous nudity.

Rick Hill returns to the title role and the character once again finds himself in an adventure that puts him in danger while also placing him in close proximity to a princess. That's honestly all you need to know.

Howard R. Cohen returns to the writing duties but also directs this instalment and he's clearly been taking notes as this film is charmingly cheap as the three that preceded it. There's quite a bit of footage reused from the earlier movies and everything is done, as usual, with more exuberance than actual skill.

The poor editing, ridiculous plot development and unconvincing acting are all still as endearing here as they were throughout the franchise and this time round the cast helps. The return of Rick Hill actually feels like the role is nicely back in the hands of the man who started things off (even though the second movie featured the best portrayal of the character by John Terlesky) while the lovely ladies this time round include the attractive Maria Ford as Dionara, the even more attractive Michelle Moffett as the sly Kana and the also attractive Anya Pencheva as a fighting woman who cares not where her clothes fly as the violence rises. Brett Baxter Clark provides some amusement as a dedicated warrior who hasn't allowed himself to be distracted by women.

Moving along at a fair pace, and clocking in at just about 80 minutes, the film doesn't outstay it's welcome although it does already feel rather dated (considering it was released in 1991). It's nothing unmissable but it's certainly a decent last outing for the character that fans should enjoy as much as the first film.
5/10. 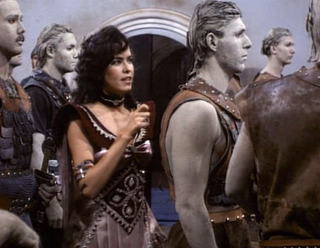