Deathstalker this time gets himself mixed up with yet another princess (Carla Herd) and there's yet another nasty magic man (Troxartas, played by Thom Christopher) who wants a lot of power for himself. There's a magic stone to be found and pieced together, a bunch of warriors brought back from the dead, an attractive woman who dabbles in a bit of torture (the beautiful Terri Treas) and another attractive woman (Claudia Inchaurregui) who actually kinda stalks Deathstalker and keeps popping up at just the right time.

Howard R. Cohen returns to the writing duties (and would return to write AND direct the next instalment) and isn't afraid of repeating himself. Sadly, the film forgets to aim low and so doesn't really cram in enough big fight sequences or gratuitous nudity considering what audiences were given in the first two movies.

Director Alfonso Corona does reasonably well with the material and tries to keep you distracted from the details, like castle walls only being an inch thick, but he can't do too much with material that's pretty weak in the first place.

John Allen Nelson is okay in the main role, but not half as much fun as John Terlesky (who, let's face it, completely owned the role in the last movie), while nobody else makes much of an impression. Even the ladies doing their best onscreen fail to match anyone in the previous film. Carla Herd is especially bland, outshone by both Terri Treas and Claudia Inchaurregui for the entire movie. Thom Christopher is given a pretty weak villain to portray and the action in the last half hour or so feels like it's being played out by people with no interest in making it look realistic. Which is a shame.

It's still watchable though, which may say more about my tolerance levels than the film itself.
4/10. 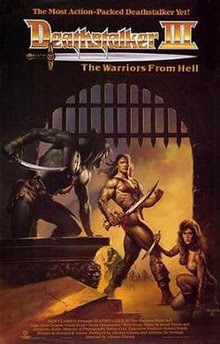