Do take note, the clips included in this review are skits performed by either Abbott & Costello or other performers in the movie and I have included them here for people who want a taste of the talent on display while perhaps not wanting to view this particular movie. Taken out of context, the clips themselves aren't spoilers for the film but they do provide a great sample of the content.

While this Abbott & Costello movie was filmed after Hold That Ghost it was actually released first in an attempt (and most probably a successful one) to provide audiences with another service picture starring the comedy duo that would repeat the winning formula of Buck Privates.

Our two stars aren't accidentally enrolled this time around, however. They're Navy men. Not very good Navy men but Navy men nonetheless. When a handsome singing sensation (played by Dick Powell) decides to pull a disappearing act, change his identity and join the navy it's not long before he gets Bud and Lou embroiled in his attempts to stay unrecognised, attempts constantly being put in jeopardy by the tenacious Dorothy Roberts (Claire Dodd). So there's a plucky gal, some standard schemes and scams and more musical interludes from the horribly chirpy trio known as The Andrews Sisters.

Directed by Arthur Lubin, and written by Arthur T. Horman and John Grant, everyone easily slips back into the same roles they had while making previous movies with the duo. It's certainly not up to the same standard as Buck Privates (the comedy just isn't as funny and the musical numbers are even weaker) but it's still fun for fans and features a number of decent skits: "The Lemon Bit" is one of my favourites but the movie also includes the wonderful "7 x 13 = 28" routine, fun with Lou trying to get into a hammock, a mildly amusing initiation routine and a fantastic bit of tapdancing from The Condos Brothers.

Dick Powell isn't too bad in his role, Claire Dodd works with what she's given and The Andrews Sisters are as horribly twee and asexual as ever. Thankfully, as it should be, the focus stays on Bud and Lou for the majority of the film and the two are talented enough performers to keep things moving along pleasantly enough even during the weaker moments. No classic but it's certainly worth a watch if you're a fan of the stars. As I am. 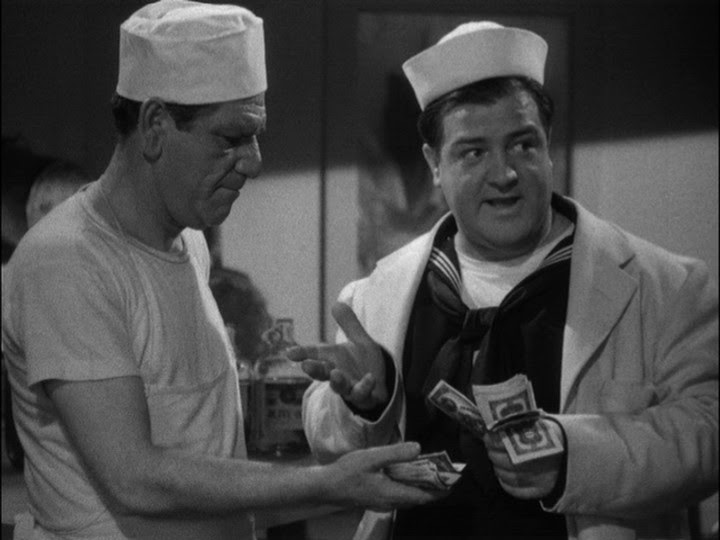