Really, if you can't read the title of this Abbott & Costello movie and figure out just what kind of situation(s) they're going to end up in then you clearly haven't seen any of their first few movies. The boys are a couple of vendors who end up hotfooting it to some proper cowboy & indian territory. Then Lou accidentally fires an arrow through a tepee that means he should marry the lady within, there are a few musical numbers, some comedy stuntwork on lively horses and some amusing moments and misunderstandings with animals. There's a limp plot about Bronco Bob Mitchell (Dick Foran returning after his stint in Keep 'Em Flying) not really being a cowboy and trying to put things right with a lovely woman (Anne Gwynne) but there is also some enjoyable wordplay and the film debut of Ella Fitzgerald, who provides the two musical moments that are actually decent as opposed to the weak numbers sung by Foran or 'The Merry Macs'.

Arthur Lubin is once again in the director's chair and everyone knows the drill by now. The lads are introduced, there's a bit of wisecracking in between the set-up material, and then it's on to the adventures. The screenplay by True Boardman and John Grant is fine but the movie, perhaps surprisingly for those used to the style of the duo, works better in the physical moments than it does with the verbal exchanges. Lou trying to milk a cow provides plenty of laughs, though there are plenty of misunderstood phrases helping things along there, while an unexpected horse ride and an eventful chase sequence during the finale really stand out as great set-pieces. It's just a shame that the rest of the film didn't hit the same heights.

A & C are as good as ever (or as bad as ever, if you don't like them then you're not going to find anything here to change your mind), Dick Foran is okay but a bit too bland this time around and Anne Gwynne is very easy to like. But it's Ella Fitzgerald who stays in the memory after the credits have rolled, with her energy and her great voice. I'd say that fans of the lady should, despite her limited screentime, add a point to my final rating. 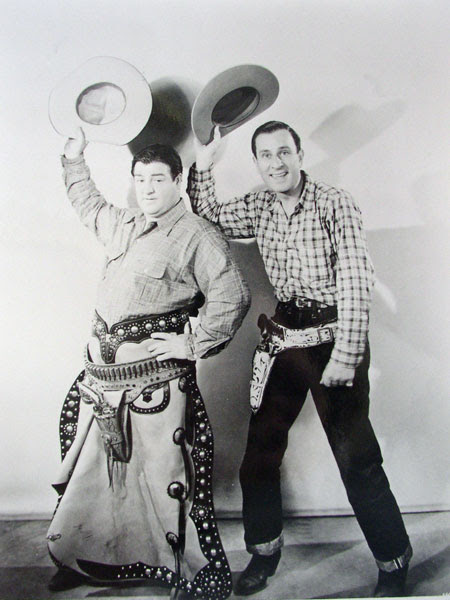