If Steven Seagal can barely put any energy into his onscreen activity then why should people even bother straining to write a decent review? I'm almost tempted to take the Seagal route here - get a stunt double to do most of the work, insert some badly edited nonsense and fill out the background with horribly cheap CGI.

The big man returns as Jonathan Cold, the character from The Foreigner that you never really cared to see again anyway. But that matters not one iota. Because this is Steven Seagal. And you WILL care to see him in whatever he does. This time around he is, as you might expect, out to save millions of lives and some nasty folk plan to build and explode a nuclear device in the glorious land of America. Seagal is a patriot and he's a patriot who always remembers one thing - you can't spell America without CIA (even if the letters are placed in a slightly different order).

Written by Martin Wheeler, and directed by Alexander Gruszynski, this is a movie that is inept in almost every way. We all know that Seagal isn't the best actor in the world but here he's only given decent turns from Tamara Davies (by decent I may be being kind but she's far from the worst thing in the movie) and Tmothy Carhart  among a cast full of people mangling accents, failing to convince as tough guys and generally being as weak as the material they have to work with.

This is a problem in many Seagal movies, they have become a product churned out of a conveyor belt that use some slapping action moves and a number of foreign bit players, but it's not too bad when there is some decent action to prove distracting. Nope, this movie doesn't even have that. There's no tension here, the editing is positively shocking in places, the stunt double gets plenty of screentime once again and nothing here will entertain even undemanding viewers after some lowbrow antics.

The plotting is terrible, the acting and action unconvincing, the characters uninteresting and everything here (from the opening credits to the final scenes) smacks of extreme laziness. A horrible experience. 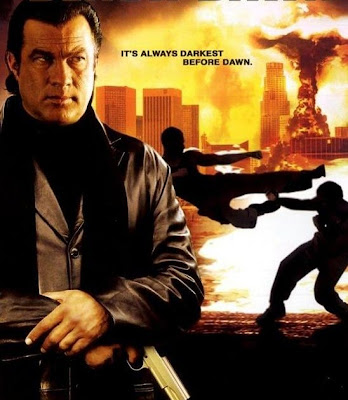