Anyone who knows my view on the Fast & Furious franchise should predict that I was optimistic, yet also very cautious, about this spin-off. The car-based core series has often entertained me, they peaked with the mix of action and ridiculousness in the sixth and seventh instalments, and then eight just went too far over into the kind of silliness that kept taking me out of the movie. This film, pairing up Dwayne Johnson and Jason Statham for their own action-packed adventure, looked enjoyably silly from the first trailer I saw.

And it is. Which was a huge relief for me. This film makes it obvious from the very beginning that the central characters are almost superhuman and your brain shouldn't spend too much time calculating the odds of all of their plans and stunts being physically possible.

Written by Chris Morgan and Drew Pearce, the story concerns a deadly virus, a cybernetically-enhanced supervillain (Brixton, played by Idris Elba), and a young woman named Hattie (Vanessa Kirby) who has already tried to defeat Brixton, but finds herself defeated. Fortunately, Hattie is the sister of Shaw (Statham), which is why he is asked to help, along with the one person he really doesn't want to be paired up with, Hobbs (Johnson). This isn't a one-man job though, and working together may be the key to any chance of success, which would also basically save the world.

Directed by David Leitch (who previously did such good work on Deadpool 2), this is big dumb fun that runs for just over two and a quarter hours (do any major action movies nowadays manage to come in at a brisk 90 minutes?) and manages to entertain from start to finish, thanks to the comedic tone of the script, the charisma of everybody with a major role, and the pacing. The set-pieces are enjoyable loony, with as many challenges as possible thrown at our heroes while they generally outrun, out-think and out-fight everyone around them.

If you enjoyed the interplay between Johnson and Statham in Fast & Furious 8 (which, let's be honest, was at its best when they were onscreen) then I don't see any way that you wouldn't enjoy this. They remain amusingly antagonistic towards one another, and competitive when it comes to who can despatch the most disposable henchmen, and both men get an equal amount of time to show off. Elba is a fantastic villain, and he appears to be having a lot of fun in the role, and Kirby is as good as, if not better than, anyone else onscreen, with a tough attitude and a badass skillset ensuring that she can hold her own in any of the major action sequences (including a scene in which she believably takes on Johnson). Helen Mirren reprises her role, as the mother of the Shaws, and entertains once again in her one main scene, and Eddie Marsan is good value in a small supporting role, a Russian Professor who may be able to help ensure the virus can't harm others.

Plenty of punches are thrown, you get a few moments of vehicular mayhem, there are a couple of fun cameos (which I won't spoil here), and those who are patient enough to sit through the end credits will be rewarded with numerous little extra scenes, which are also a lot of fun. I doubt anybody is going to spend too much dissecting this, or searching for hidden meanings or metaphors, because it's absolutely not that kind of film. But I am pretty certain that it will please most action movie fans, and be on regular rotation when it comes to the home media market later in the year. I know I'll be getting it, and am already looking forward to a rewatch. 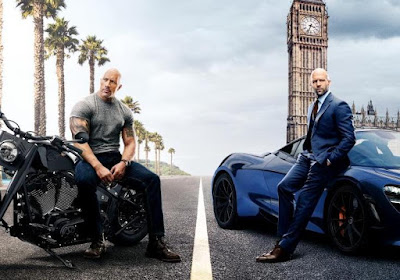