If you are of a certain age then you'll know of The Banana Splits, an anarchic and fun TV show that featured four characters (Bingo, Fleegle, Snorky, and Drooper) played by people in fluffy suits. Think of a more kid-friendly version of The Monkees and you'll be close. Anyway, I have fond memories of the show, as do so many others.

Which makes this horror-comedy makeover all the stranger. The trailer seemed to appear out of nowhere last week, when it was picked up and shared around by various sites, and here we have the film already. I wasn't sure what to expect, but I knew I definitely had to check it out.

Finlay Wojtak-Hissong plays Harley, a young boy who is taken along to a recording of The Banana Splits show for his birthday. He's there with his mother (Beth, played by Dani Kind), his inconsiderate father (Mitch, played by Steve Lund), and his brother (Austin, played by Romero Carere). And he's taken along a friend named Zoe (Maria Nash). Everyone watches the show, but things start to get weird when a select few members of the audience are allowed to stay behind and meet the gang. It turns out that the gang are robots, and something has gone wrong with their programming.

Looking up The Banana Splits Movie brings up a number of interesting points. First of all, although I haven't seen anything else from director Danishka Esterhazy, but I'll check out anything else she does after this, I HAVE seen another movie written by Jed Elinoff and Scott Thomas. They've done a fair bit of TV work, including The Mistle-Tones (one of the many Christmas movies I have seen in my lifetime) and they have a history of mashing up TV show formats with some extra blood and death (as they did with their My Super Psycho Sweet 16 movies). Second, this was apparently based on an idea for a Five Nights At Freddy's movie. Whether that is true or not, it's hard to unsee the similarities once you consider that possibility.

Although never as wild or inventive as it could be, this ticks a lot of the boxes if you were somehow waiting on a horror comedy featuring the Banana Splits as deadly killers. The main characters look pretty much the same as ever, a number of familiar accessories are put to good use (such as the cars that the characters used to drive and Fleegle's magic tricks), and you get a version of the familiar theme song played here and there. Some of the kills are gory fun, and the central premise ensures that the horror is underscored with a current of dark comedy.

Wojtak-Hissong is a decent young actor, as are all of the humans here, but each main sequence is really a waiting game until the Banana Splits get involved. They are too much fun, in normal or killer mode, and so you just have to give props to Kind, Lund, Nash, and Carere for playing second fiddle to them. Richard White does fine as Stevie, the one human character who stars alongside the Banana Splits, and Naledi Majola tries her best in the role of Paige, a put-upon member of staff who looks after the show's live audience members. There are numerous others onscreen, all of them potential victims, and they're all acceptable enough in their roles.

I liked this movie. I wasn't sure who the hell thought it would be a good idea, but I liked it nonetheless. It's just a shame that it seemed to hold back when the potential was there to go even darker and crazier. Because if you're going to create a film around this ides then you may as well make up a mess of fun. 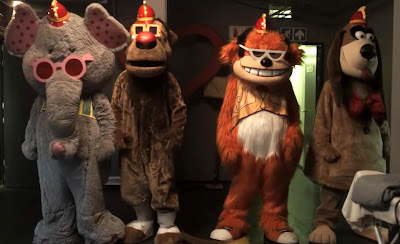